Snooki’s fiancé Jionni LaVelle is constantly teasing her about bad breath and this has caused the petite reality TV star to get quite a complex about it. 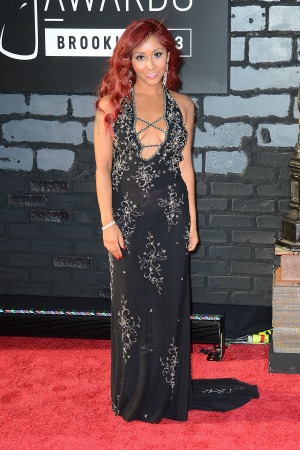 Snooki has revealed that she is paranoid about having bad breath. So much so that she never leaves home without her mint chewing gum.

The petite former Jersey Shore star’s paranoia stems from her fiancé Jionni LaValle, who often teases her by saying she has very smelly breath.

Clearly, all those jokes have affected Snooki’s confidence and she will now not go anywhere without a backup plan.

Snooki, whose real name is Nicole Polizzi, confessed to Us Weekly, “I’m never without minty gum so it feels like I just brushed my teeth. Jionni always tells me my breath smells. So I’m paranoid.”

A rather mean joke to play on your fiancé, don’t you think? However, the pair are still smitten and appear to be great parents to their little son, 14-month-old Lorenzo.

Bad breath is not the Snooki’s only worries though, she has also done a few strange and embarrassing things in her life and we aren’t even talking about Jersey Shore.

The Dancing With the Stars contestant confessed to some of her more embarrassing moments, saying, “I’ve dropped my tampons in business meetings. It’s always the super-size ones, too! I just laugh it off, but it’s really embarrassing.”

The Snooki & JWoww star had been busy lately as a contestant on Dancing With the Stars. She proved herself as more than capable, receiving a score of nines from all the judges when she danced the foxtrot with her professional dancing partner Sasha Farber.

“Competing on Dancing With the Stars is like boot camp. I keep Tylenol [a brand of Paracetamol] handy because my body is so sore, and Band-Aids for all my blisters,” she said.

Snooki’s body will now have time to rest though as her Dancing With the Stars stint sadly came crashing to a halt last night when she was eliminated from the competition.

“I can’t even talk right now… I love everybody here, so it sucks,” a stunned and visibly upset Snooki said during her goodbye interview.

We wish Snooki all the best in her future endeavors. Perhaps she will have time to organize a play date with little Lorenzo and DJ Pauly D’s daughter Amabella now?