Derek Hough and Ashley Benson are two of Hollywood’s hottest young stars. Could they be dating or is Benson back with her ex-boyfriend? 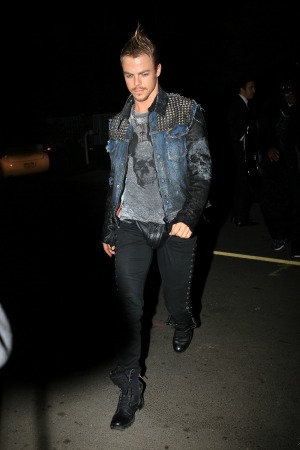 Derek Hough may be mending a broken heart after his recent split with The Vampire Diaries star Nina Dobrev, but has he found another gal to spend some time with?

Last weekend, while Hollywood kicked off Halloween week early, the Dancing With the Stars pro and Ashley Benson seemed to share a similar costume at Kate Hudson’s party on Saturday.

The two stars dressed as edgy punk rockers complete with tons of eyeliner, studded leather jackets and black boots. Even though they didn’t arrive together, their outfits certainly complemented each other well.

The ballroom sensation, who had a short-lived, but very public romance with his sister’s pal, is definitely a coveted bachelor in Hollywood. The Pretty Little Liars star and Hough would make a cute couple.

Benson was recently spotted with her ex-boyfriend Ryan Good earlier in the month at Usher’s birthday party, but she has yet to confirm their reconciliation. So, there still might be a chance for the two ABC stars.

Hough is currently nursing a back injury while in the midst of Season 17 of the dance competition show. However, he and partner Amber Riley from Glee have been burning the floor each week with their sizzling dance moves.

As for Benson, the PLL Halloween episode just aired with co-star Troian Bellisario donning a punk costume for the show. Perhaps Ashley was inspired by her look in the episode for her own real-life Halloween wardrobe.

Hough and Benson weren’t spotted leaving Hudson’s party together either, but a fan can wish for such a hot hookup!