The Hunger Games: Catching Fire is less than a month away. And in the latest trailer, Katniss Everdeen is back on the chopping block. 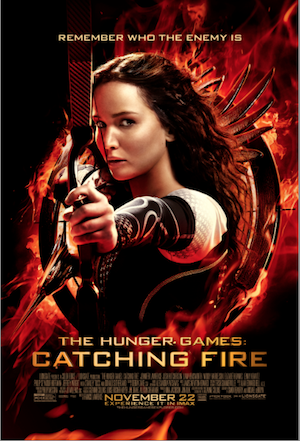 “Miss Everdeen, you fought very hard in the arena, but they were games. Would you like to be in a real war?” That’s the chilling introduction to the final trailer for this fall’s The Hunger Games: Catching Fire.

It’s a stern show of power from President Snow (Donald Sutherland), who’d like nothing more than to get rid of Katniss Everdeen (Jennifer Lawrence) once and for all.

The new trailer focuses on Katniss’ latest trek into The Hunger Games, which is very different from her previous outing. The 75th Annual Hunger Games are part of Panem’s 3rd Quarter Quell. It’s a super battle between former champions, including Katniss and Peeta (Josh Hutcherson).

Katniss is pushed to her mental, physical and emotional limits. Once again, her family is put in danger and it’s up to her to keep them safe. Not to mention, her BFF Gale (Liam Hemsworth) is on his own suffering in silence. The stakes are higher than ever for this girl-on-fire.

The film opens in theaters Nov. 22.

Will you be seeing The Hunger Games: Catching Fire this fall?