Carrie Underwood and Brad Paisley will host Country Music’s Biggest Night — the CMA Awards — for the sixth time this year. 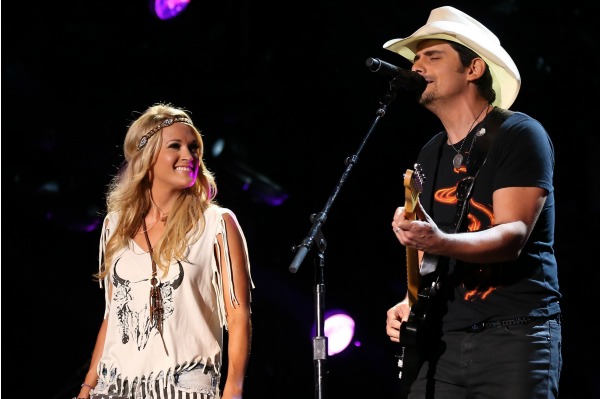 The people behind Country Music’s Biggest Night know that if it ain’t broke, don’t fix it — and their formula for a great awards show includes two perfect hosts.

Brad Paisley and Carrie Underwood are returning for their sixth time hosting the CMA Awards, and they’re both pleased as punch to be asked back again.

“I really think that the CMA Awards are a very special thing in our town,” Paisley said in a CMA statement. “When they say it’s ‘Country Music’s Biggest Night,’ it is. It’s the biggest night of ratings that we ever get. The reason that I think it has worked is because we both take it so seriously that we’re ready when we walk out there.”

“I think I can speak for both of us when I say that we are extremely excited to be back for a sixth year hosting the CMA Awards,” added Underwood. “Each year we work harder so that we can help present the best show possible.”

Both Paisley and Underwood are CMA vets in a different way, too: Each has racked up multiple awards for themselves. Underwood has five, including the 2006 Horizon Award (now called New Artist of the Year), Female Vocalist of the Year for three years running in 2006, 2007 and 2008, and Single of the Year in 2007 for her huge hit “Before He Cheats.”

Paisley has racked up a whopping 14 CMA Awards, making him the fifth winningest artist in the organization’s history: The 2000 Horizon Award, 2010 Entertainer of the Year, Male Vocalist of the Year for three years running in 2007, 2008 and 2009, Album of the Year in 2006 for Time Well Wasted, three-time Musical Event of the Year for 2004’s “Whiskey Lullaby” with Alison Krauss, 2006’s “When I Get Where I’m Going” with Dolly Parton and 2009’s “Start a Band” with Keith Urban, 2001 Vocal Event of the Year for “Too Country” with Bill Anderson, George Jones and Buck Owens, and four Music Video of the Year Awards for 2002’s “I’m Gonna Miss Her,” 2004’s “Whiskey Lullaby,” 2007’s “Online” and 2008’s “Waiting on a Woman.” (We’re thinking he probably won’t be recognized for his ill-advised tune “Accidental Racist.”)