AnnaLynne McCord may appear to have it all, but the actress has candidly spoken out about her horrific ordeal and rape when she was a child in hopes to raise support for women sold into sex slavery. 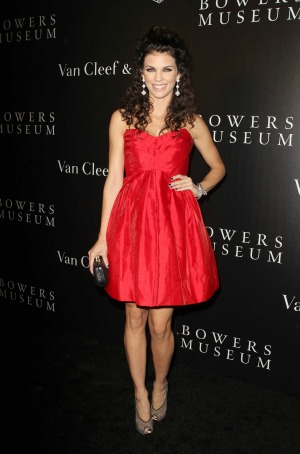 AnnaLynne McCord may appear to be a smiley and happy actress, but her past is riddled with darkness and depression.

The 90210 star’s character Naomi Clark has been through some hard times, including a rape in the story line, but her own life reflects even more traumatic ordeals.

McCord has recently opened up at a fundraiser for the Somaly Mam Foundation Gala Life Is Love. The foundation works to support and raise money for women who have been trafficked and sold into sex slavery.

The 26-year-old actress revealed the molestation that she suffered as a child during the gala, held at New York’s Gotham Hall last Wednesday. She also broke down on stage as she recalled how the ordeal had left her suicidal.

McCord revealed, “I was raped. I was abused as a child. This is so important to me.”

“I was suicidal, I cut my arms up. I wanted to die. I had a bottle of pills in a hotel and I was ready to end it all.”

“But something, I don’t know what, led me to Somaly Mam.”

This is not the first time that McCord has spoken out about her rape ordeal, as she previously made a shocking confession at the Life Is Love event last year.

McCord explained that, “it was a situation where I found myself in my own home being hospitable, and that hospitality was taken advantage of at an extreme level. I did not have a voice, and now I do, and I’m practicing using my voice for others.”

“Finally I can say I was taken advantage of — not from my own shame that I did something to deserve that — and now I can have a clear conscience.”

The horrific experience that McCord faced has led her to work with the Somaly Mam Foundation for many years and the charity managed to raise a total of $700,000 at the event. According to PageSix.com, McCord’s speech helped to raise an additional $35,000 for the charity.