We’ve all been on pins and needles wondering, will Bruce Jenner be in the Kardashian family Christmas card this year? Will Lamar Odom? The wait is over folks! Take your first look at the 2013 Kardashian Christmas card… 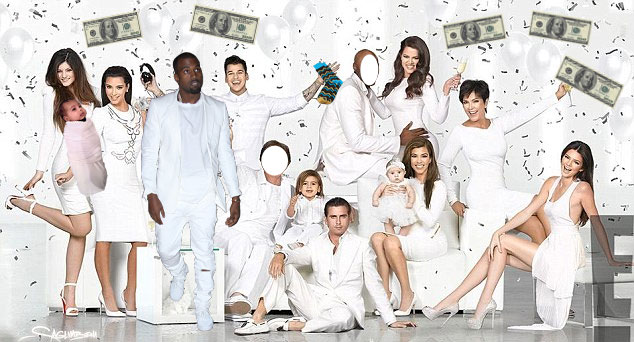 The Kardashian clan is a busy crew. It’s hard to get everyone’s schedule to line up so they can all be in the same place at the same time (outside of filming Keeping Up With the Kardashians.) While the family is overjoyed about Kim Kardashian and Kanye West’s engagement, the family isn’t feeling overly festive this year with the marital problems Kris and Bruce Jenner have been having, as well as the scandal surrounding Khloe Kardashian and Lamar Odom’s marriage.

For Christmas this year, the Kardashians decided to modify their card from last year. As you can see, Baby Nori and proud papa Kanye have been added. Sadly, Jenner and Odom’s faces have been removed. You can’t even see Kim’s hand because her diamond is so huge and while the family poses under a shower of $100-dollar bill confetti from the media empire they’ve built, Rob Kardashian proudly displays his… socks.

(Note: In case you haven’t figured it out, this is a joke and is not, in fact, the Kardashians’ 2013 Christmas card. We have to say that.)