Britney Spears released the cover art for her upcoming album Britney Jean. Along with the cover art, Britney took to her website to post a personal, handwritten letter to her fans about what to expect from this new album. 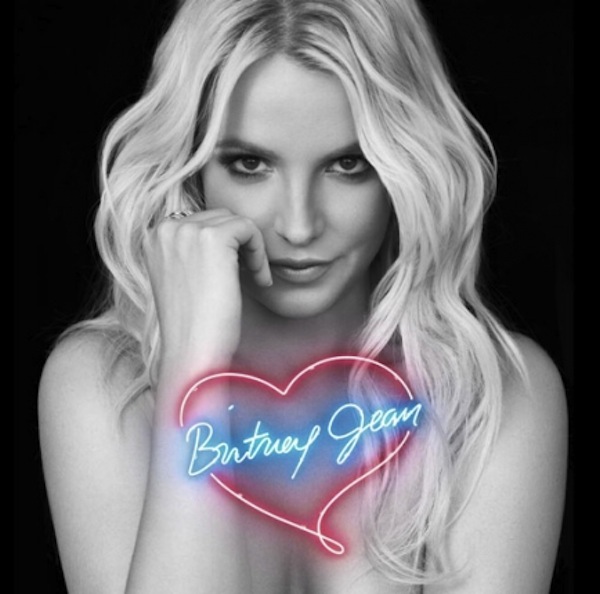 Wearing a little smirk and nothing else, Britney Spears appears staring straight ahead in the cover art for her upcoming album Britney Jean.

The album, the singer’s eighth studio album, is due to be released on Dec. 3.

A little over a month ago, Britney’s first track off the new album, “Work B****,” was leaked online.

The ensuing video was deemed by many people — including Britney herself — as “too sexy.”

But if her letter to her fans is any indication, “too sexy” is just one of the many sides of who she is.

In a handwritten letter to her fans posted on Friday on her website, Britney pens a heartfelt message to her fans about her new album and where she is in her life.

“Dear Fans,” she writes, “I am putting the finishing touches on my new album, Britney Jean over the next few days and I am so excited for you to hear it. I poured my heart and soul into this album and it’s been an incredible journey.”

Along with Britney in her Britney Jean journey is producer will.i.am as well as singer/ songwriter Sia, who worked with Britney on her upcoming single “Perfume.”

Spears continues, “I can’t believe this is my eighth studio album and I know I keep telling you that it is my most personal record yet, but its true and I’m really proud of that.”

She also writes, “I have been through a lot in the past few years and it has really inspired me to dig deeper and write songs that I think everyone can relate to.”

She certainly has had her fair share of events in the two years since her last album. There was the engagement and then breakup with fiancé/agent Jason Trawick, and her job as a judge on The X Factor.

She also gives us a hint as to what to expect form this album. “There are a lot of really fun, upbeat dance songs, but it was important to me that I show my strength, and my attitude, and my vulnerability. Of course, I also have some surprises for you guys.”

Britney closes out her letter with a final thought about who she is now.

“I want to show you the different sides of Britney Spears. I am a performer. I am a Mom. I am funny. I am your friend! I am Britney Jean.”

We will see all sides of Miss Spears as Britney Jean — the first album she’s released to carry a parental advisory sticker.

And by the way, Britney, a handwritten note? My grandmother would be so proud.

Check out Britney’s handwritten note below and let us know what you think in the comments below. 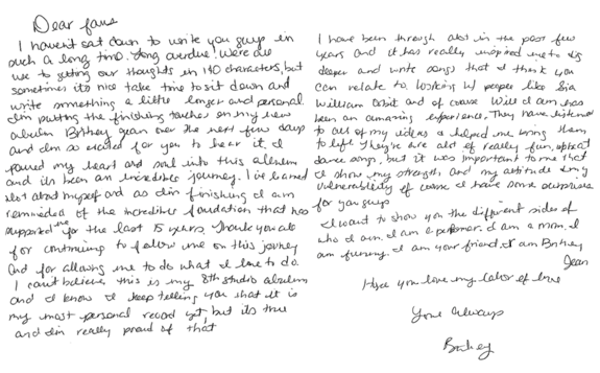