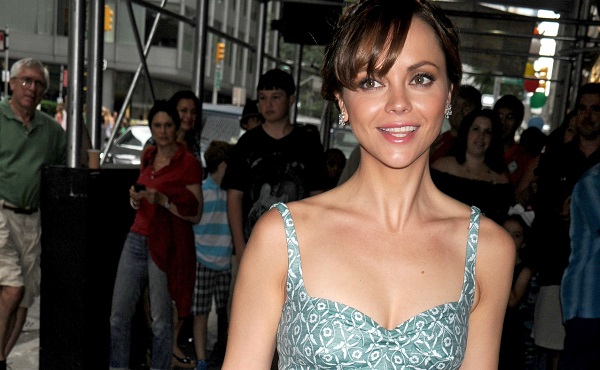 Christina Ricci enjoys the perks of being engaged >>

According to People, they were married in an intimate ceremony at Harold Pratt House & Peterson Hall on the Upper East Side of Manhattan. The mansion, built in 1920, serves as the headquarters for the Council on Foreign Relations. What do you wear when getting married in a gorgeous mansion in New York? Givenchy, of course.

People also writes that Ricci’s gown was white silk tulle with an “appliqué of Chantilly lace and satin piping, embroidered with micro pearls.”

We’re sure Ricci looked absolutely heavenly, and we hope the couple releases some snapshots soon.

We’re so excited to hear of Ricci’s first (and hopefully only) wedding. She was previously engaged to Owen Benjamin (Sullivan and Son) until she called off their nuptials in June 2009. Later, Ricci met Heerdegen when they both worked on the television show Pan Am. Ricci starred as a stewardess, and Heerdegen was a dolly grip for the show.

Take a look at Ricci’s character on Pan Am >>

They made the official announcement of their engagement in February, after Ricci was spotted out and about sporting her engagement ring. In May, Ricci spoke with Us Weekly about her wedding plans and just how much she loves Heerdegen.

“I’m excited to be with all my friends and family and just have a lovely night,” she told the mag. “I love so many things about [James]. He’s my favorite person on Earth.”

So sweet! We’re thrilled to share Ricci and Heerdegen’s news and wish them all the best (with plenty more exciting announcements to share down the road). Our big question: Was Ricci’s former Casper co-star, Devon Sawa, in attendance?

Want more celebrity gossip? Sign up for our newsletter >>