Chris Brown has been arrested on felony assault charges — which is bad news for a guy trying to avoid probation violations. 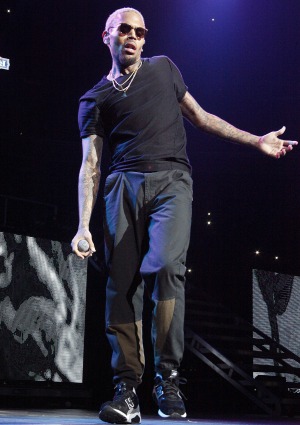 Singer Chris Brown is in boiling-hot water today after being arrested on assault charges — but this time, his alleged victim is a guy.

The rhythm and blues singer was charged with felony assault after punching a man in the face outside the W Hotel in Washington, D.C., early this morning. His bodyguard, who is apparently terrible at his job, was also arrested.

Here’s how it went down: Sources told TMZ that two women approached Brown outside the hotel and asked to get a picture with him. Brown agreed, but as the photo was about to be snapped, two men hopped into the frame, too.

Witnesses say Brown then threw a homophobic slur, saying, “I’m not into this gay s***, I’m into boxing!” and punched one of the men.

Police department spokesman Officer Anthony Clay confirmed Brown was arrested after a “physical altercation,” and law enforcement sources told TMZ that Brown did not appear to be drunk or under the influence of drugs when police arrived — despite the fact that he had spent the evening hosting a party at the nearby The Park at Fourteenth nightclub.

And it turns out Brown could have totally avoided the arrest if he had just apologized at the scene — but now the victim says he is definitely pressing charges. But Brown’s camp has a different version of events. They told TMZ that the fight broke out when the two men tried getting on Breezy’s tour bus and were blocked.

The arrest could signal some really, really bad news for the singer, who just had his probation reinstated from his 2009 assault case that resulted from his beating up then-girlfriend Rihanna. According to the terms of his probation, any charges, regardless of a successful prosecution, are a violation and could result in serious jail time.

The incident comes just two days after reports that Brown has alienated his own mother with his bad behavior.

“It was because Chris’ crew, who he refers to as OHB are not good people. He wouldn’t get help for a drug problem, so she gave him an ultimatum and left,” a source told Bossip. “She’s fed up with Chris’ crew and when Chris came home for the first time last month, they completely disrespected her and he was high as a kite. She doesn’t know what else she can do for him, her nor Rihanna. They’ve tried to get him help and his drug dealing/gang banging friends keep supplying him with more drugs. He’s alienated his family and people who truly care about him for yes men and women who keep him high enough to use him,” the source said.

Earlier this month, Mama Brown sent some tweets that seemingly referred to her son’s troubles.

Brown is expected to remain in jail until his court appearance Monday.