All eyes were on Julianne Hough on Friday night, but it wasn’t for a good reason. 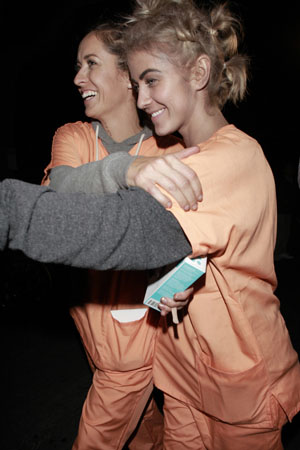 Julianne Hough turned more than a few heads on Friday night at a Beverly Hills Halloween bash when she showed up wearing scrubs, knotted hair and dark bronzer à la “Crazy Eyes” from the hit Netflix show Orange is the New Black.

And more than a few were offended by her blackface getup.

“WOW, Julianne Hough done effed up. When will white people stop thinking dressing up in black face is a good idea?” tweeted @lilly64.

“Why [would] Julianne Hough wear black face? There are so many other options. Doesn’t matter if its for Halloween, its still offensive,” added @kissmcguiness.

Others thought it was funny.

“I don’t get why people are giving Julianne Hough Crap for dressing up like Crazy Eyes for Halloween. I thought it was hysterical,” tweeted @xKeniaRx.

Blackface originated in the 19th century as a theatrical makeup technique used to turn white actors into black characters for vaudeville and black minstrel shows. It’s generally viewed as racist for white people to wear blackface because the white actors who used the makeup technique portrayed black characters as racist stereotypes, thus perpetuating antiblack stereotypes among the public.

Hough seemed to be unaware of her offensive costume as she partied with friends dressed as the rest of the OITNB cast, but the online backlash prompted her to issue an apology in a tweet.

“I am a huge fan of the show Orange Is the New Black, actress Uzo Aduba, and the character she has created,” the Safe Haven star tweeted on Saturday. “It certainly was never my intention to be disrespectful or demeaning to anyone in any way. I realize my costume hurt and offended people and I truly apologize.”

Do you think Julianne Hough’s Halloween costume is offensive? Sound off below!