In the unnamed South American country of Daniel Alarcón’s At Night We Walk in Circles, words have meaning, and they carry consequences. The words you write, speak or recite can send you to prison or make you disappear completely.

In 2010, The New Yorker named Daniel Alarcón as one of the 20 best fiction writers under the age of 40, and the San Francisco Chronicle and The Washington Post named Alarcón’s book Lost City Radio as their Novel of the Year. Alarcón’s newest book is an inventive and emotional story about the consequences of the words we say.

Red Hot Book of the Week: The Burgess Boys by Elizabeth Strout >> 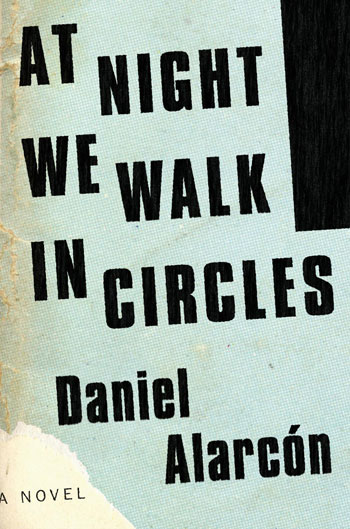 About At Night We Walk in Circles

In an unnamed South American country, still healing from earlier government oppression, there is a young man named Nelson. Nelson is an actor living with his mother and continuing an affair with his ex-girlfriend. It has long been Nelson’s dream to go off and live with his brother, who emigrated to the U.S. during the difficult days when the two of them were much younger. As a result of the fact that he has always thought he might leave at any time, Nelson has never allowed himself to get particularly close to anyone. Therefore, when he disappears, most of his so-called friends hardly notice.

But wait, we’re getting ahead of ourselves. Before Nelson disappears, he goes on tour with two other men who are all that remain of the radical theater group Diciembre. The three men are performing the play The Idiot President, which at one point caused its playwright to be arrested for crimes against the government.

Books to read while waiting for Game of Thrones >>

Nelson’s story is told by an unnamed narrator, someone who is obviously very involved in Nelson’s story but who doesn’t seem to have known Nelson well. During breaks in the narrative, the narrator shares bits and pieces of interviews with those who knew Nelson best. The narrator interviews Nelson’s mother, his ex-girlfriend and even his alleged friends from the theater school, all in an attempt to gain further insight into the young man’s life.

Alarcón is an amazing writer. He interweaves Nelson’s story and the unnamed narrator’s own musings in a way that creates heightened suspense for the reader. What exactly happened to Nelson? How? Why? Once you’re just 15 pages into At Night We Walk in Circles, you will not be able to stop reading until you have the answers.