Howard’s love song for Bernadette from last night’s Big Bang Theory has turned into a massive hit! Hear the song, read the lyrics and find out how you can get your hands on the recording.

Related story Emmy Nominations 2019: Who Were the Biggest Snubs & Surprises? 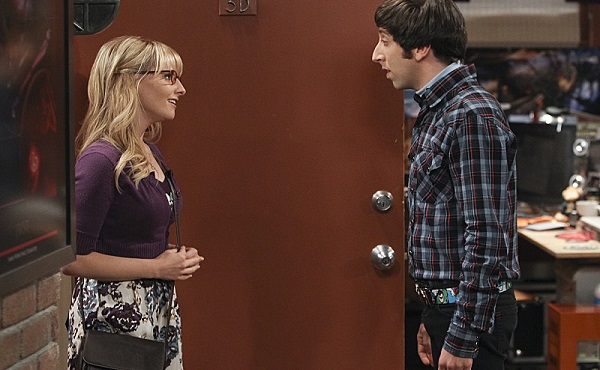 Last night on The Big Bang Theory, Howard (Simon Helberg) went all out to mark the anniversary of his first date with his lovely wife, Bernadette.

The romanticism behind it was utterly surprising — and not just because it’s Howard and TBBT fans know he’s not exactly the sensitive one of the group. Recently, the Wolowitzes experienced trouble in paradise. Howie’s teasing got back to Bernadette (thanks a lot, Sheldon) and hurt her feelings. Their odd relationship seemed even more on ice when, during a scavenger hunt, Howard and Sheldon’s girlfriend Amy Farrah Fowler really hit it off over their love of Neil Diamond. Some of us wondered how much longer Howie and Bernie would make it.

In this week’s episode, though, the pip-squeak of a man made up for his past transgressions by showing just how romantic he can be if he tries. Howard wrote a song for Bernadette and enlisted all their friends to help him pull off the musical feat. There were only two things standing in his way: Bernie’s clumsiness and a deadly raccoon virus. However, nothing could stop Howard from showing his love and appreciation for his adorable wife. He and the rest of the gang showed up at the hospital to serenade Bernadette with the one-of-a-kind and insanely geeky song written especially for her. Take a listen:

Are there more wedding bells in The Big Bang Theory‘s future? >>

Adorable, right? If you love it as much as we do, we have great news: The song, “If I Didn’t Have You (Bernadette’s Song),” is officially available for purchase from iTunes! To make sure you catch all the nerdy moments, here’s a look at the lyrics:

“If I didn’t have you, life would be blue
I’d be Doctor Who without the TARDIS
A candle without a wick, a Watson without a Crick
I’d be one of my outfits without a dick-ey
I’d be cheese without the mac,
Steve Jobs without the Wozniak.

“I’d be solving exponential equations that use bases not found on your calculator, making it much harder to crack
I’d be an atom without a bomb, a dot without the com
And I’d probably still live with my mom.

All, echo: And he’d probably still live with his mom.

“Ever since I met you, you’ve turned my world around
You’ve supported all my dreams and all my hopes
You’re like Uranium-235 and I’m Uranium-238,
Almost inseparable isotopes
I couldn’t have imagined how good my life would get
From the moment that I met you, Bernadette.

“If I didn’t have you, life would be dreary
I’d be string theory without any string
I’d be binary code without a one,
A cathode ray tube without an electron gun.

All: And he’d definitely still live with his mom.

“Ever since I met you, you’ve turned my world around
You’re my best friend and my lover
We’re like changing electric and magnetic fields;
you can’t have one, without the other.

“I couldn’t have imagined how good my life would get
From the moment that I met you, Bernadette.

All: Oh, we couldn’t have imagined, how good our lives would get
From the moment that we met you, Bernadette.”

The song was written by The Big Bang Theory’s returning guest star, Kate Micucci, who plays Raj’s ex-girlfriend, Lucy. Micucci is also a comedic singer who, along with her friend Riki Lindhome, performs under the moniker Garfunkel and Oates. And if you loved the awkward love story between Raj and Lucy, fear not. She told The Hollywood Reporter that we haven’t seen the last of her.

As for the rest of the show, Leonard discovered Penny’s romantic side at the bottom of her closet, Amy and Sheldon almost kissed (in her daydream) and Raj is still forever alone. Thank goodness for Bernie and Howie, right?