The ever-so-lovely Kate Middleton showed up at a gala in London solo. Could the royal couple not get a sitter for Prince George? 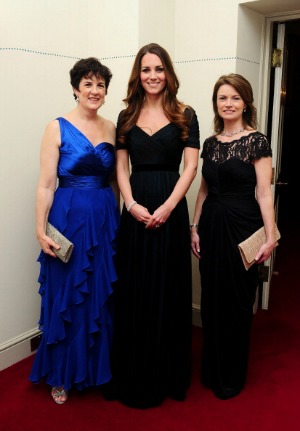 Catherine, Duchess of Cambridge stepped out solo Thursday night to raise money for one of her favorite charities.

Kate glowed at the 100 Women in Hedge Funds Gala raising money for Action on Addiction, one of her and Prince William’s pet organizations — but her husband was nowhere to be found. Instead, he stayed home with little Prince George, who was surely worn out by his christening festivities the day before.

Kate certainly was not lost without her husband, however. She glowed in a simple ink blue silk off-the-shoulder gown with black velvet belt by Jenny Packham, one of her favorite designers, with her long hair in loose waves. She accessorized her ethereal gown with diamond earrings, a diamond bracelet and a pavé diamond ring in addition to her stunning sapphire and diamond engagement ring.

The event was conveniently held at Kensington Palace in the State Apartments just steps away from the luxe Apartment 1A she shares with William.

During the gala Kate proudly told guests that Prince George was “such a good boy” during his christening, and one can see how seriously he took the entire sacrament by the earnest look he kept on his chubby little face.

Kate, William and Prince Harry are all patrons of Action on Addiction, following in the footsteps of the late Princess Diana who also favored addiction charities.

“Action on Addiction is an enormously worthy cause and I’m delighted that this evening’s event is such a success.”

Want to steal Kate’s look? You can snag her Jenny Packham gown online at Stylebop for a mere $5655.