It sure took a long time, but Katie Holmes has joined Twitter. Her verified account went up on Friday. 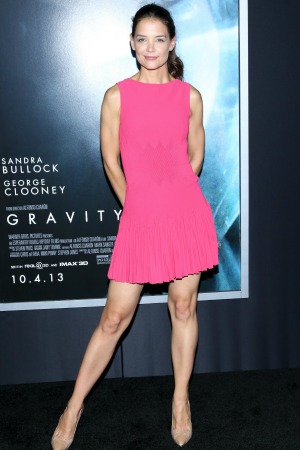 It’s about time she joined the social media revolution! On Friday, Katie Holmes joined Twitter all the way from South Africa.

The actress is currently filming The Giver with a star-studded cast including Meryl Streep, Jeff Bridges, Alexander Skarsgård and Taylor Swift. The film is an adaptation of the children’s novel by Lois Lowry about a utopian society that slowly turns dystopian through the eyes of a young boy.

Holmes appears to be enthusiastic about the project because her first tweet was actually a retweet of producer Nikki Silver’s photo of the cast.

What does the Foxx say about dating Katie Holmes? >>

The actress then decided to give the social media site a try herself. She used quite a few exclamation points to emphasize her excitement.

As of press time, Holmes has more than 4,800 followers. That number is sure to jump as the news spreads that the former Dawson’s Creek star has a verified account. She has a long way to go to match Swift’s 35 million followers though.

Suri, her daughter with former husband Tom Cruise, is also with her while she shoots in South Africa. In her post-Cruise life, Holmes has settled nicely in New York City and she has a slate of films coming out in 2014. Fans can look forward to not only The Giver, but Days and Nights with William Hurt and Allison Janney as well as Mania Days with Luke Kirby.

In the meantime, @KatieHolmes212 is just happy to be tweeting.