The Vampire Diaries goes old school this episode and gives us some vintage Delana moments in order to reclaim Stefan’s memory. Too bad the nostalgia also comes with the news of Bonnie’s death. 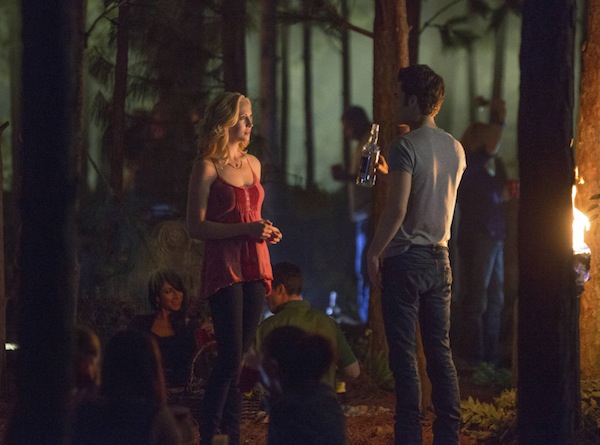 All right, I’m a sap. Tonight’s episode of The Vampire Diaries may have made me a little misty-eyed. Yeah, I admit it. I didn’t realize how much I liked Bonnie until her memorial tonight. Just find some creative, magical way to bring her back please?

This episode caught my inner cry baby off guard because it starts with Elena (Nina Dobrev) and Damon (Ian Somerhalder) trying to reclaim Stefan’s memory and not doing such a good job of it. That’s when they decide they need to bring in the big guns of witch magic but Bonnie’s nowhere to be found.

While Matt pouts because Bonnie hasn’t returned his e-mails and Jeremy struggles to hide the truth, Stefan (Paul Wesley) decides letting his hunger take over is much better than wallowing in the past. We’re all for living in the now, but not if it means ripping into someone’s throat. Stefan chooses Jesse to be his victim. Though Caroline does get there in time to save the day, she has to feed Jesse her blood to save his life.

Elena and Stefan rediscover one another

Before Stefan decides he likes biting people more than he likes Damon and Elena, Elena takes him on an adventure through town. It’s more for her own benefit than Stefan’s, we have to say. She takes Stefan to the first place they met and the high school where their relationship blossomed. None of these field trips spark any memories. But the memories do spark old feelings.

Elena almost kisses Stefan before blurting out that she’s in a relationship with Damon. Though, we do love the idea of a reignited love triangle, the last thing we want her to do is cheat on Damon. The two barely entered into a stable relationship. We expected at least half a season before everything got knocked off kilter.

Damon does all the dirty work

Damon showed us the bad boy we know and love tonight by encouraging Stefan to unleash his inner bloodlust. They crash a car and flirt with a cute waitress all while downing a few shots.

Then Jeremy tells Damon Bonnie is dead, and the pressure is suddenly all on Damon’s shoulders because he has the burden of telling Elena about Bonnie’s death. He’s back to being the dependable shoulder to cry on. We are kinda ready to see Damon get into some trouble again. Domestic Damon is endearing but let’s not lose that spark of excitement.

Dr. Maxfield turns creepy when he stabs Jesse with a needle that will complete his vampire transformation. Because Jesse had Caroline’s blood in his system, all he needed was something to stop his heart to become a vampire.

Add Tyler back into the mix when he shows up at Bonnie’s memorial, and there’s a recipe for chaos. Caroline now has two new vampire on her hands — we’re including Stefan — and an estranged werewolf boyfriend. She sure knows how to pick ’em!

Season 5 is amping up fast. What do you think of the episodes so far?