There’s a price on Mary’s head and a possible ghost by her side. While we’re still interested, this week’s Reign left us less impressed than the premiere. 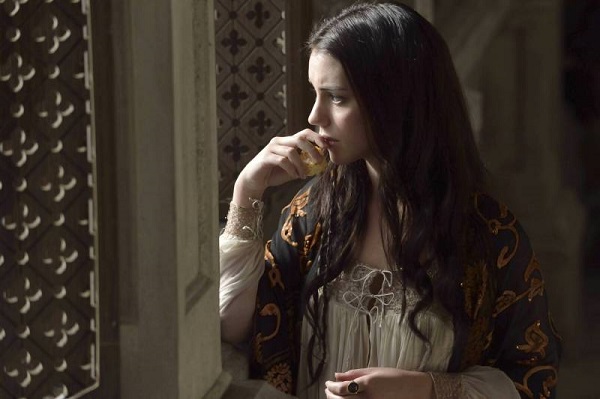 I was excited for The CW’s Reign the minute they made the announcement. France? Mary Queen of Scots? A YA historical fiction novel-type television show? Yes, please! The premiere episode did not disappoint. Its follow-up, however, was a little dry.

We were promised a love triangle

It’s there. Sort of. You can see the beginning of it as Francis and Bash continue to waffle on their feelings toward Mary (Adelaide Kane). Francis claims he’s helping keep her safe because they’re friends. Does he truly consider her nothing more than a friend right now? Or is he just hiding his deeper feelings because he knows they may not be in his country’s best interest? Meanwhile, his half-brother, Bash, seems all too willing to help Mary when she needs something or calm her when she’s upset. But, there’s not much chemistry there. There haven’t been any overly dramatic doe-eyes at each other. So, does he like her… or is he just helping her out to piss off Queen Catherine (Megan Follows)?

It’s also terribly difficult to even play favorites between the two brothers. On the one hand, Francis is a douche. While I understand his reasoning, I still think he doesn’t make the kindest decisions when Mary is involved. He has amazing hair, though. Then there’s Bash (Torrance Coombs). He seems truly interested in helping Mary, as well. All she had to do was pout and he was springing off into the woods to search for Collin, who it turns out wasn’t beheaded. But… he kind of looks like Littlefinger, from Game of Thrones. That makes it incredibly difficult to swoon over the king’s illegitimate son.

Already over the Collin thing

The overly dramatic scenes involving Collin’s forced attempt to rape Mary during the last episode were really quite lame. However, when the Queen announced he’d been behind, we thought we’d dodged the soap opera bullet with that plot. Sadly, we hadn’t. It turns out, somehow Collin and a local thieving boy were switched. The guards beheaded the thief and had been torturing Collin. During the middle of the night, someone freed Collin and sent him running for the woods.

Luckily, that drama was (mostly) put to bed this week when Bash set off for the woods and found Collin dangling from a tree by his ankles. Apparently, that’s a fairly typical way for the heathens/drifters/”druids” that live in the woods to sacrifice someone. While Bash seemed leery of that set-up, though, Francis (Toby Regbo) believed that must have been what happened. Eventually we witness Queen Catherine discussing the issue with one of her guards, though, and we find out she set the whole thing up.

During a party celebrating the engagement of Prince Charles (Francis’ very little brother), Mary meets Simon. He’s English, but lives a good portion of his time in Paris. Oh… and he’s hell-bent on torturing Mary. It’s not so much that he wants her dead, he just doesn’t want her to keep her alliance with France. Scotland and France are too powerful for England to contend with and everyone knows England has big plans for invading Scotland.

Aside from menacing her at the party, he finds other ways to torment her. He sends a maid into Mary’s room to try on her dress and pretend it has been poisoned with acid and is burning her alive. Later, she discovered the girl alive and well in Simon’s room. Toward the end of her terrible day, she turns back the blankets on her bed (shouldn’t she have someone doing that for her?) and finds a giant red X painted on her sheet. Très dramatique!

I actually liked all this. The Queen’s version of playing the foe is a little too over-the-top for me. Simon is more villainous. I love it. However, when Francis sees Simon bullying Mary at the party, he pulls her aside and promises to help their alliance appear stronger than it really is by pretending to actually love her. Other than a few close conversations, though, Francis does nothing to indicate his loyalty to Mary… at least not in front of Simon or the rest of the English. I doubt that’s going to be enough to save Mary.

Show announcement: Everything we first learned about Reign >> 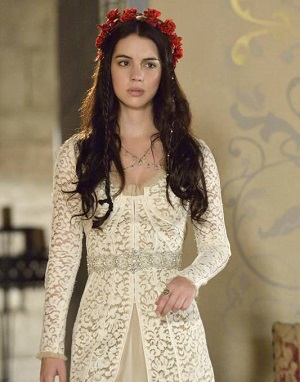 Mary has a “ghost” on her side, though

Last time, Mary discovered a mysterious girl was looking out for her and doing her best to protect her from the various forces working against Mary. Due to some hints from a little girl in the premiere, I’m fairly certain the girl will be a ghost, but… who knows.

This week, Mary caught little Prince Charles talking to darkness and he admitted he had a friend named Clarissa. Later, Mary crept into her secret passageway and convinced Clarissa to talk to her and give up any details she knew about who was trying to give her. Clarissa told Mary it was both the English and Queen Catherine.

Clarissa, whoever she is, is a smart cookie and her soft spot for Mary and Charles is interesting. I also like the slightly creepy way they weave her into the storyline. However, I hope we find out more about Clarissa soon. Knowing who/what she is doesn’t necessarily have to kill the mystery and intrigue of the show.

When Bash and Francis are in the woods and they discover Collin, they get some unexpected visitors. All it takes is a few words murmured from Bash and the drifters quickly skitter off. Later, Francis accuses Bash of speaking “Pagan” or “Druid.” I’m all for taking a little artistic license with history for the same of entertainment. But, Druid is an insanely old religion/language (from the Iron Age). I seriously doubt even Prince Francis would have recognized it if it was spoken in his presence. At best, he would have thought it was Latin. Also, there’s clearly something evil happening in the woods and Bash is clearly onto it. Why does it have to be related to the Druids?

The second episode of Reign wasn’t quite as strong as the first. However, I still don’t hate the show… even if one of the ladies-in-waiting was clearly wearing a (short) dress from Urban Outfitters this week. I love the mystery and scandal (Kenna with the King, again?!). I could use a little more actual romance, though.

Want more TV news and reviews? We offer a newsletter for that >>