While Lamar Odom spent his summer self-destructing, Khloé Kardashian quietly supported her husband from afar. Does the couple stand a chance? 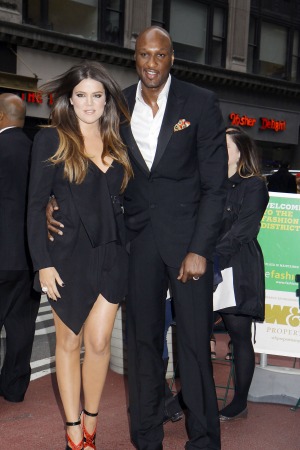 Lamar Odom is trying really hard to make a comeback, not only on the basketball court, but also in his personal life. According to E! News, the NBA player has been sober for more than two weeks.

He’s so serious about keeping on the straight and narrow that several teams are interested in him and are meeting with the athlete to assess his readiness. Odom is also staying in touch with his wife Khloé Kardashian.

Khloé Kardashian tweets love is “4ever” >>

The duo were last seen together on Oct. 8. They were spotted visiting Kris Jenner after the news broke about her split from longtime husband Bruce Jenner. Even though Kardashian and Odom showed a united front that day, the couple have been living apart since Aug. 30, the day he was arrested for a DUI.

The 33-year-old basketball player is also trying to surround himself with friends who will help keep him sober. Odom seems committed to making a career comeback. It’s unclear whether Kardashian will forgive him for his alleged drug use and infidelity, but there are a few positive signs.

Lamar Odom holed up in drug den with two women >>

The reality star has been spotted still wearing her wedding ring. She was on the red carpet for the opening of Scoop NYC this week and her ring was exactly where you would expect it, on her finger.

Will the two be able to make it work? The question remains unanswered right now, but Odom looks like he is taking the right steps to making amends and getting back out on that court.