Robin Thicke has raised some eyebrows for his recent lyrics and dancing, all which relate back to sex. But he says he learned what he knows about women from his very famous father. 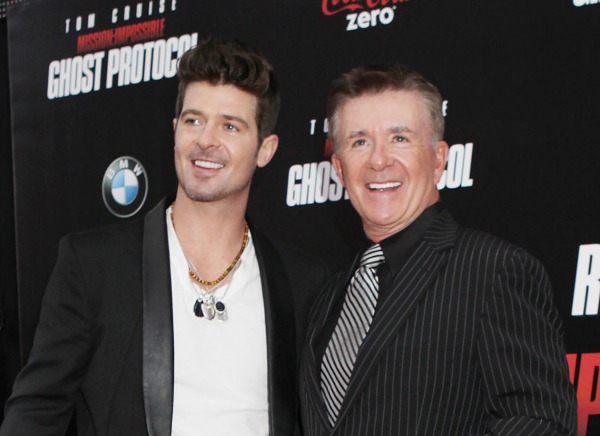 We always knew Robin Thicke was a little different than most people, and it’s easy to imagine it might have been caused, at least partially, by his dad Alan Thicke. The elder Thicke was on Growing Pains as Robin was growing up and, according to his son, very much led the life of a bachelor.

Robin had some experiences in his youth he attributes to his father’s wild ways, and it led to who he is today.

“My dad was single my whole pubescent period. He had Ms. Alabama, Ms. Dominican Republic — every week,” Thicke told Elle. “I was like, ‘Dang, Pops.’ He had an indoor Jacuzzi, and he frequented it. The first time I saw a naked woman was when I went to take a shower one morning before school. I was like, ‘Who is this girl in my shower?'”

If anyone has doubts as to why Alan was so popular at the time, the actor recently tweeted out a reminder.

But Thicke, Sr. wasn’t just living a bachelor lifestyle, he was teaching his son a thing or two as he was growing up. Robin said he learned a lot about women from his father.

“We were on vacation and some pretty girl walked by. I started ogling her like a 12-year-old boy, and he said, ‘I know she’s pretty, but you stared at her and followed her across the room,'” Robin remembered. “‘What if there’s a prettier girl sitting two tables away? Now she’s not going to feel special. She’ll say, “You look at all the girls like that.” You’ve gotta play it cool so you don’t look like you’re desperate.'”

Thicke didn’t have long to learn about women, because he met his future wife two years later. Robin and Paula Patton have been together since they were 14, and he said he still knows how to make her feel like the most important woman in the world.

“I like to take her out to a fancy, six-course meal that lasts three hours and stare into her eyes,” he explained. “Of course it’s a little schmaltzy. There’s nothing women love more than an effort. You can even mess it up. The shoes that you bought don’t have to be right. You might have gotten the wrong chocolates. But she’ll know if you made an effort.”

Despite recent rumors of cheating, the two appear to be in love as much as they did when they were teenagers. But Patton has added a new credit to her role as Robin’s wife: his biggest fan. He admitted she loves his music and, “Sometimes she’ll even play groupie for me.”