Tori Spelling is close to broke, she says — and it’s her own fault. 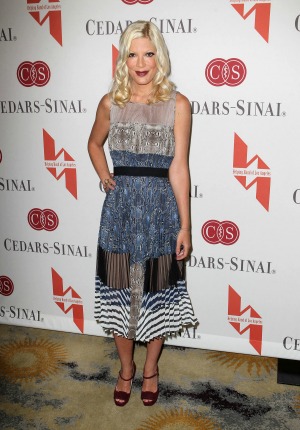 Tori Spelling is so broke that her husband can’t afford a vasectomy, but she now admits the family’s dwindling bank account is all her fault.

Spelling, who grew up in unimaginable opulence as the daughter of uber-rich TV mogul Aaron Spelling, was left $800,000 when her father passed away — a fortune to most people but a pittance compared to his estate as a whole, estimated to be worth half a billion dollars.

“It’s not my fault I’m an uptown girl stuck in a midtown life,” she writes in her upcoming book Spelling It Like It Is. “I was raised in opulence. My standards are ridiculously high. We can’t afford that lifestyle, but when you grow up silver spoon it’s hard to go plastic.”

“It’s no mystery why I have money problems,” she said. “I grew up rich beyond anyone’s wildest dreams. I never knew anything else. Even when I try to embrace a simpler lifestyle, I can’t seem to let go of my expensive tastes. Even when my tastes aren’t fancy, they’re still costly. I moved houses to simplify my life, but lost almost a million dollars along the way.”

Spelling explained that her fickleness when it comes to living arrangements is one of the main causes for the family’s current financial crisis. She insisted on the move from Encino, California to the ritzy beach community of Malibu, then changed her mind again at a cost of hundreds of thousands of dollars — but instead of cutting back right away, Spelling and husband Dean McDermott rented another lavish home.

“We couldn’t afford to buy a house. Yet now we were living a lie in a grand house,” she notes.

Things went from bad to worse when Spelling was hospitalized for placenta previa while pregnant with the couple’s fourth child, Hattie. Her mom Candy Spelling, who made bank selling Tori’s childhood home, had to shell out for rent on yet another house closer to the hospital.

Other sources on money woes include the cancellation of her reality show Tori and Dean, and the folding of her shop invenTORI, as well as her out-of-control shopping habit.

“I bought ridiculous amounts of stuff for the kids: clothing, toys, crafts,” she explained. “We traveled (and did crazy things like upgrading hotels at my instigation). Yesterday I went into the gas station to get the kids some water and I dropped fifty dollars on some DVDs (they were on sale!), chips, and some lottery tickets.”

So what is the poor little rich girl doing to change her circumstances? In addition to setting up paparazzi shots for pay, she’s dialing back on the real estate. She moved the family into a smaller home in a less exclusive neighborhood. “It wasn’t my dream house,” Spelling writes, “but it was a house we could afford. I promised myself, and Dean, and the children, that no matter where we landed, I would make that home.”