Morena Baccarin of Homeland and her husband Austin Chick welcomed their first child together on Tuesday. 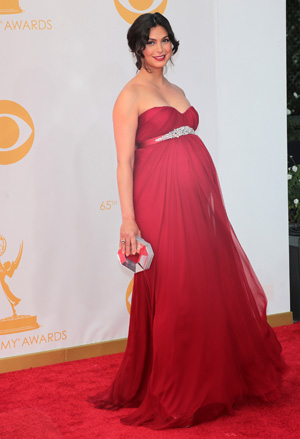 Morena Baccarin and her husband, Austin Chick, are the proud parents of their first child together, a baby boy.

The Homeland star gave birth to son Julius on Tuesday, her rep confirmed to People magazine. The baby boy was born in Glendale, California, and weighed just under 8 pounds. “Julius and his mother are happy and healthy,” the rep added.

Baccarin had some delivery complications because her baby was in the breech position (feet first); however she was able to give birth naturally. Apparently, the actress’s OB/GYN, Dr. Ronald Wu, is the only one in Los Angeles who delivers breech babies without a C-section in a hospital.

“I’m so happy I was able to deliver with Dr. Wu,” Baccarin explained to People. “Breech delivery is a dying art and he gave me the birth experience I wanted.”

The Golden Globe winner first announced her pregnancy in May and admitted that filming her hit Showtime series was becoming difficult due to her increasing baby bump.

“I was a little freaked out telling the show,” Baccarin told Us Weekly in June. “I have a sense of responsibility to my job and I suddenly felt like, ‘Am I going to be disappointing everybody that I’m knocked up?’ But life goes on.”

Morena Baccarin at the Emmys >>

The former V actress said that her co-star Claire Danes’ previous pregnancy got everyone on set to be pros at hiding expecting tummies on the show. “Claire’s laid down the groundwork, and they’re really good at hiding pregnancies now,” Baccarin joked.

After receiving her Golden Globe Award for Best Actress in a TV Drama, the 34-year-old new mom said she worked hard while pregnant. “I was on my feet a lot during the pregnancy,” Baccarin revealed at the 2013 Golden Globe press room, further proving her award was well-deserved.