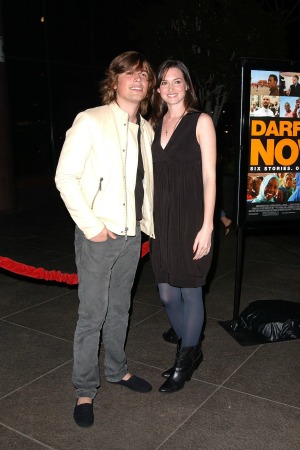 The growing Hanson brood has grown even bigger. On Thursday, youngest brother Zac Hanson and his wife Katie announced the birth of their second son who arrived on Oct. 17.

The 28-year-old dad shared the news and an adorable photo with People. “We are very excited to share the addition of George Abraham Walker Hanson to our growing family. Abraham is healthy and we are happily sharing a little down time together as a family.”

The couple already have two children, John Ira, 5, and Junia Rosa Ruth, 2 1/2. Little George Abraham Walker will go by his middle name, Abraham. He weighed in at 8 pounds, 7 ounces at birth.

The newborn’s siblings were thrilled that they were going to have another baby in the family.

The drummer told the entertainment magazine back in May, “It’s fun this time to watch the little ones so excitedly anticipating their new sibling. We are so happy and thankful to add more life and love to our family!”

Zac and Katie were married in June 2006 after dating for five years. Their wedding was held in a private ceremony in Atlanta, Georgia.

The Hanson brothers all have growing families, so their new cousin will be surrounded by lots of other kids. Middle brother Taylor has five kids with his wife Natalie, while oldest brother Isaac has two children with his wife Nicole.

The group released their latest album Anthem in June and the single “Get the Girl Back” was their first in over nine years to hit the U.S. Billboard chart.

Along with their musical ventures, the siblings also launched their own beer called Mmmhops. The beer premiered at the after-party for the film The Hangover Part III.

Welcome to the world, baby Abraham!