The Smash director photographed kissing Katharine McPhee is actually married to another very famous actress, Mary McCormack. Michael Morris wants his marriage to work, but it looks like his wife feels otherwise. 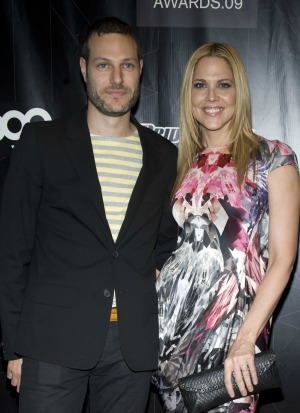 The reported affair between Katharine McPhee and her Smash director Michael Morris is affecting many lives, not just the two involved. The relationship itself isn’t big news, but the fact that Morris is still married is what makes it a sad story.

Morris has been married to actress Mary McCormack for more than a decade. The couple have three children together. It is reported she is now looking to end that marriage.

Katharine McPhee refuses to do press for Smash? >>

“They’ve been together for more than 10 years and always had such a solid marriage,” a source reportedly told Life & Style magazine. “They have three daughters, so it’s incredibly sad. He wants to keep the family together, but as far as Mary is concerned, it’s over. There’s no going back.”

McPhee is still technically married to her husband of five years Nick Cokas, but they split up in March, reportedly before her relationship (or whatever it is) with Morris began. But Morris is still very much involved with McCormack, and it sounds like she had no idea about the fling.

“Mary only found out this week about the affair after he confessed everything to her,” the source added. “She had no idea anything had been going on. The last thing she ever thought was that he was seeing another woman.”

The cheating scandal is very reminiscent of the photographs released of Kristen Stewart kissing her Snow White and the Huntsmen director last year. That kiss may have been what ended her relationship with Robert Pattinson.

“She is beyond furious and is absolutely devastated. So is Michael. He really wants to make it work between them and try and save the marriage,” the source continued. “But at the moment, Mary wants to split up with him.”

Although McPhee and Morris were photographed kissing while out in Hollywood recently, it looks like his heart is still with his wife.

“Only time will tell if Michael and Mary can make things work and get over this,” the source said. “He loves Mary and is so sorry about what he’s done.”