Recent pictures of Lindsay Lohan have emerged that appear to show her reaching for a bottle of wine. Has the troubled startlet fallen off the wagon just three months after rehab? 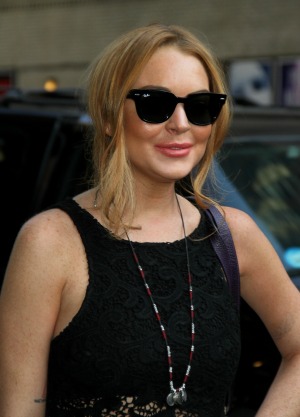 On Wednesday morning, a picture surfaced of Lindsay Lohan, and the troubled starlet appeared to be reaching for a half-full bottle of wine.

The picture has since caused a lot of speculation about whether or not the actress is back to her old ways and has left her sobriety behind, just three months after leaving rehab.

According to TMZ, the picture was snapped at a Hollywood Hills home where Lohan was hanging out with friends after missing her flight.

Lilo was at the house because she needed to wait until she could catch the red eye back to New York.

There are no pictures of the Mean Girls star actually holding the bottle of wine or drinking from it, and it seems a little unfair to be so quick to judge her.

A source close to Lohan defended her and told TMZ that The Canyons actress was not reaching for the wine bottle, and that instead she was innocently reaching for her cellphone and her handbag, which were on the same table.

However, some alarming evidence is that some say Lohan has gotten rid of her sober coach, Doug Caine, who had been living with her in New York. Apparently, she thinks she can do without him and handle her sobriety on her own.

Caine previously told People magazine, “You need to use your sober coach to bring treatment home, to the set, to the attorney’s office when you’re negotiating your next movie.”

“Without bringing a sober coach to those places, she is highly likely to relapse.”

The actress has appeared to be very dedicated to staying on the straight and narrow since leaving her 90-day court-ordered rehab stint and there have even been rumors that she wants to lend her name and voice to a new rehab center.

It is very possible Lohan did not drink from the wine bottle and that the picture was all an illusion, but is it really a smart move for the actress to be hanging around with people who are careless enough to drink in front of her?