Mark your calendars! Benedict Cumberbatch will return as Sherlock on Jan. 19. 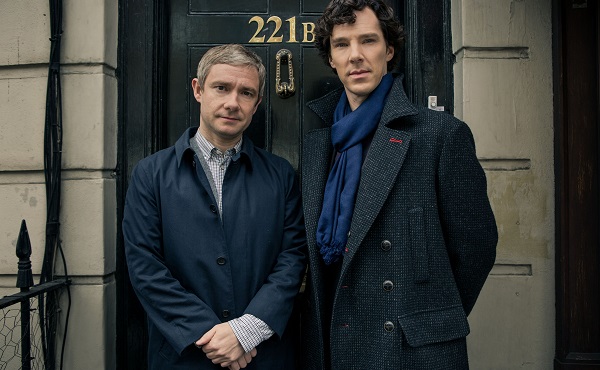 It’s been a long, long time since we’ve seen Sherlock Holmes (Benedict Cumberbatch) and Dr. John Watson. The wait has been truly harsh for Sherlock fans. After all, you may remember that during last season’s finale entitled “The Reichenbach Fall”, Sherlock flung himself off the roof of 221B Baker Street. Poor Watson (Martin Freeman). Of course, viewers knew he wasn’t dead. We watched as he looked on as John and Mrs. Hudson mourned at his gravesite. But, how did Sherlock survive the fall? And, now that he’s back, how will his family and friends react to his faked death? We’re dying to know and, after two long years, we’ll finally find out in January.

We know you love Benedict: Here is a shower scene for you >>

PBS made the official announcement today that they’ll air the premiere of Sherlock Season 2 on Jan. 19, immediately following Downton Abbey, which will premiere on Jan. 5. So far, all we have to go on is a very vague preview from BBC One.

All about Cumberbatch’s triple threat in Toronto >>

We’re quite excited about PBS’s pairing of Downton and Sherlock. According to the station, it’s all part of a new effort to pair dramas together on a certain night in an effort to raise viewership for the public station. Their acquisition of Downton alone has already paid off quite handsomely. Sunday primetime grew 26 percent during the last season of Downton. Pairing the well-loved Sherlock with it can only boost their ratings.

While Downton has shown to be a success on PBS, they clearly seem even more confident in Sherlock‘s success. The current season of Downton is already airing in the UK, but Americans are being forced to wait for the show until January. Meanwhile, the BBC has yet to announce the official premiere date for Sherlock, but it’s rumored to start there in January as well. That means no spoilers for Americans but, instead, a simultaneous showing. Or, perhaps after such an awfully long wait, PBS is just too kind to make Sherlock fans wait even longer for Cumberbatch’s return.

Take the plunge! Sign up for our newsletter and get TV news in your email >>

See you in January, Cumberb****es!