Fifty Shades of Grey is heating back up. After the abrupt exit of Charlie Hunnam, producers have found a new Christian Grey. 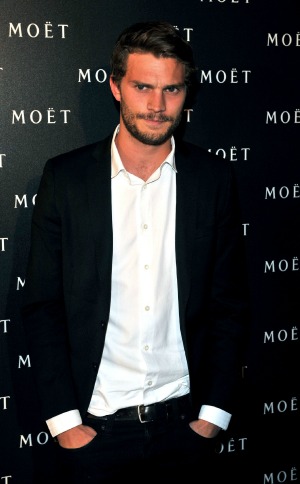 Dornan may be the perfect fit for Grey. He’s a former model who’s appeared in ad campaigns for Christian Dior, Armani and Calvin Klein. He definitely has no problem showing a little skin on camera. Stateside, Dornan’s best known for his role as Sheriff Graham/The Huntsman on ABC’s Once Upon a Time. Fifty Shades of Grey will be a vast departure from that G-rated series.

Apparently, Dornan came out on top and snagged the part. Neither Universal nor Focus have released an official statement regarding his casting. But it looks like the movie’s back on track. The film will still be directed by Sam Taylor-Johnson and is expected to hit theaters Aug. 1.

What do you think of the new Christian Grey? Is he a good fit?