Tori Spelling and her husband Dean McDermott are struggling financially. They are so short on cash they can’t afford a vasectomy to prevent more pregnancies. 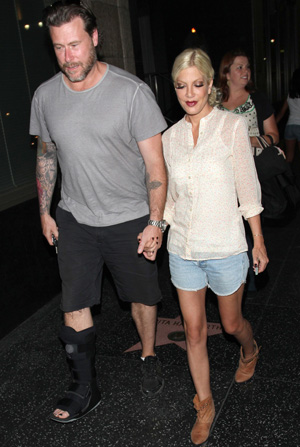 Since their reality show has been off the air, Tori Spelling and Dean McDermott have been struggling with money issues. They’re now at a point where they can’t even afford a vasectomy so the couple can avoid future pregnancies.

The couple’s reality show, Tori & Dean: Home Sweet Hollywood was canceled last year and they haven’t really had any major source of income since. The pair has been cutting expenses and were actually told by their business manager they can’t afford a vasectomy for McDermott, RadarOnline reported.

“We don’t have a series on the air right now,” Spelling told People magazine. “So we have to be more restrictive of what we can spend, just like anyone who doesn’t currently have a steady job.”

Just recently, Spelling, McDermott and their children were spotted during a family outing where they staged paparazzi photos for money. This is something they’ve done several times in the past to supplement their income, a source told Radar.

While Spelling’s dad was super-rich TV mogul Aaron Spelling, he only left his daughter a mere $800,000 when he died. This would be a hefty amount for many people, but for Spelling, who has a family of four kids and a would-be lavish lifestyle, the money was quickly spent.

Spelling and McDermott actually ended up selling their luxurious Encino home, losing money on it, and got a much more modest pad in Los Angeles’ San Fernando Valley area. The former 90210 star also admitted in her new memoir, Spelling It Like It Is, that she has had to give up all her expensive habits in order to make ends meet.

Luckily, the cash-strapped couple will try another reality show on HGTV titled Tori & Dean: Cabin Fever, which will air next spring. Not only that, but Spelling is also teaming up with her former co-star, Jennie Garth, to star in a new ABC Family series, Mystery Girls.

On the show, Spelling and Garth will play two former crime-show actresses who open a new detective agency. Spelling is also going to serve as producer on the new show.

Hopefully these projects will get Spelling and her family back on track so they can get out of their dire financial situation.