Known mostly for her comedic roles, Cameron Diaz plays a huntress out for the kill in this new movie. Not only does she play a predator, her character engages in a shocking sex scene that may have you throwing up a little in your mouth the next time you clean your windshield. Find out the details of this auto-erotic act! 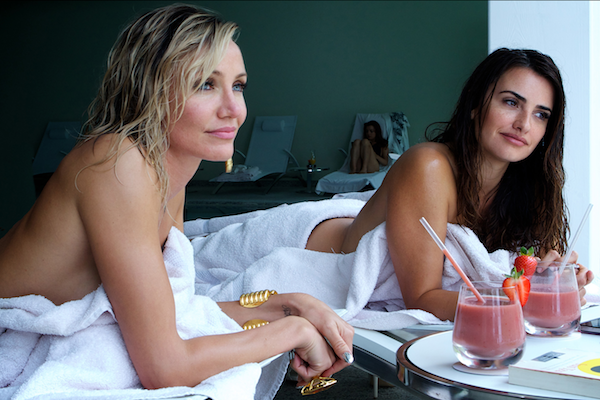 The Counselor stars Michael Fassbender as an ambitious lawyer who gets in over his head when he makes a deal to engage in drug trafficking. Set in the treacherous city of Juarez, Mexico, his partner in crime is nightclub owner Reiner (Javier Bardem), whose volatile girlfriend Malkina (Cameron Diaz) seems to have destructive plans of her own.

In perhaps the best performance of Diaz’s career, Malkina relates to her pet cheetahs and their ability to hunt and kill without remorse.

“Malkina is a sociopath and extremely smart. She is capable of anything. There is no humanity in Malkina,” Diaz said, adding, “Malkina is compelled to take the power of every man, devour it, and then break down every woman.” 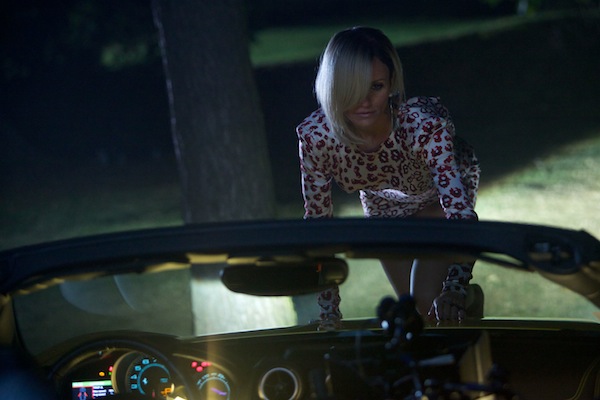 Complicated stuff. So it’s no surprise that her sexual appetite is on the strange side. In one scene, she is driving Reiner’s yellow convertible sports car, with Reiner as her passenger. She stops the car, removes her lacy thong and climbs not just on the hood of the car, but onto the windshield where she does the splits. Oh, yeah.

Cameron Diaz and Jason Segel to star in Sex Tape >>

So what is Reiner’s reaction? Let’s just say it’s not good and involves a reference to a catfish. Eww! Luckily, they never show her lady business under glass.

The one thing Malkina does have going for her is her unique feline styling. Wearing a cheetah spot tattoo on her back and silver clawlike nails, Diaz really captured the essence of the big cat predator, saying, “The tattoo symbolizes her adoration and admiration for the cheetah because she feels such a kinship she is assuming their skin — the skin of the hunter because that’s who she is.”

The Counselor opens in theaters today.