SheKnows had a chance to sit down with teen heartthrob Cody Simpson and play a little game of “Would You Rather” — you know, where you’re given the choice between two scenarios and you have to answer which one you’d rather pick. Let’s play along and see if Simpson’s answers match up with ours. 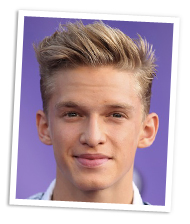 SheKnows had a chance to sit down with teen heartthrob Cody Simpson and play a little game of “Would You Rather” — you know, where you’re given the choice between two scenarios and you have to answer which one you’d rather pick. Let’s play along and see if Simpson’s answers match up with ours.

Would you rather be a professional athlete or a singer?

Analysis: This is Cody Simpson we’re talking to here. Pop star Cody Simpson. Teen heartthrob who has girls throwing themselves at him Cody Simpson. He’s going to choose singer.

However, the professional athlete thing isn’t really out of the question. As we know, he’s from Australia and he was actually training to be a pro swimmer — even winning two gold medals at the Queensland Swimming Championships. But we’re still going with singer.

Cody talks to SheKnows about music, working with the Biebs >>

Would you rather be a merman or an alien

Analysis: Ok, what kind of alien? The scary kind with acid blood that pops out of someone’s chest or the cute ones that fly around in cute spaceships? Because I would want to be a cute alien.

The thing about mermen and mermaids is that they still have to contend with sharks. No thank you. But again, Simpson’s from Australia and sharks are like cows to them. So while we’re going with cute alien, Simpson will probably say merman.

Would you rather face a
great white shark or a grizzly bear?

Analysis: Many people don’t know this, but there are rules with bears. With grizzlies, if you are attacked you can play dead and then, hopefully, they’ll see that you’re not a threat to them and they may leave you alone.

With sharks, if you are in the wrong place at the wrong time, it’s game over. OK, maybe that’s not true, but I think there’s a better chance with a grizzly. Besides, we have grizzlies in the U.S. and they are not in Australia. We say grizzly, but Cody (who loves the ocean, remember) will say great white.

Cody’s Answer: “Great white shark. I’d have more chance against the shark then I would the bear. Way more fatalities from bears than sharks.”

Would you rather go on a date
with Taylor Swift or Selena Gomez?

Analysis: Selena. Who wants to be the subject of a Taylor song? No thank you. Swift may be nice and all, but the possibility of embarrassment if and when it doesn’t work out is too much.

Oh, but wait! Cody’s friends with Justin Bieber and Bieber used to date Gomez and friend-code says she’s off limits. It’s a no-win situation. What a dilemma!

Cody’s Answer: “I have a crush on Taylor — like a musical crush. I would have to say Taylor.”

Would you rather dump or be dumped?

Analysis: Dump. Although, there’s a lot to be said for being dumped. People feel bad for you if you’ve been dumped and you get to sit in bed and eat a lot of ice cream. But you’re really sad and that’s no fun. I wish there was a “none of the above.”

Would you rather eat Vegemite or Nutella

Analysis: Seriously? Nutella all the way! Nutella is spreadable, chocolaty goodness. Vegemite is a food paste made from leftover brewer’s yeast. Gross!