A teenager steals and burns a hand-crafted scarecrow of Uncle Si from Duck Dynasty from Ball Ground Elementary School. 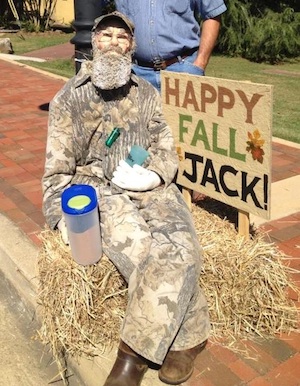 A very life-like scarecrow of Uncle Si from Duck Dynasty was stolen and burned in Georgia. Sadly, the Uncle Si scarecrow was made by the fourth-grade class at Ball Ground Elementary School in celebration of Halloween.

Duck Dynasty is popular reality television show that features the Robertson family as they operate their duck-call business, Duck Commander. The show is filmed in Louisiana. The show broke ratings records with its Season 4 premiere which garnered almost 12 million viewers.

The ratings success made Duck Dynasty the most popular nonfiction series in cable history.

Uncle Si is beloved by fans. Silas Merritt “Si” Robertson works at Duck Commander installing the reeds in each best-selling duck call. He is often the source of jokes for the Robertson family, given his penchant for being easily distracted. Duck Dynasty often shows Uncle Si napping, telling war stories about his time in Vietnam or just generally causing the rest of the Duck Commander crew to fall behind schedule.

So it’s no surprise that Duck Dynasty inspired this group of Georgia 10- and 11-year-olds. Uncle Si — the scarecrow — was totally decked out in his signature style: camouflage gear, gloves, a mug, boots and of course, the Duck Commander. The Ball Ground fourth graders even managed to replicate Uncle Si’s distinct facial features, like his shaggy beard.

The elementary school children positioned the Duck Dynasty scarecrow on a bale of hay with the sign “Happy Fall Jack!”

The scarecrow of Uncle Si went missing last week and WSB-TV Atlanta reports many residents in the small town pitched in to help find him. Cherokee County police even offered a $1,000 reward. Ball Ground immediately engaged on a Duck Dynasty mission and the Uncle Si scarecrow was reportedly sighted all over town.

It turns out a 16-year-old came forward and confessed to the Duck Dynasty scarecrow’s whereabouts — and that he was to blame for its disappearance and destruction.

“Someone called in a tip and said they’d seen it on a porch outside the city. He admitted he did take it on his way home one night and burned it because he got afraid of the media attention and what it got on social media,” said Cherokee County police chief Bryon Reeves.