The stars of Pretty Little Liars dished on the second half of Season 4 in their hour-long Facebook Live interview Monday. Find out the secrets you missed! 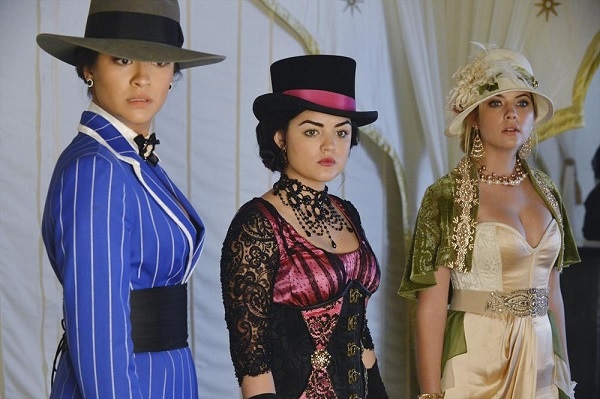 Aside from a few well-placed jokes about uncomfortable costumes and crazy one-liners, the girls of Pretty Little Liars dished on dirt for the rest of Season 4 during their first Facebook Live interview together.

The stars of the show — Ashley Benson, Lucy Hale, Shay Mitchell and Troian Bellisario — covered anything and everything in their hour-long interview. Here are the highlights:

Look for that line from Lucy Hale in an upcoming episode. All the girls agreed it was the line that stuck with them most because Hale couldn’t seem to make it work. They did multiple takes and it’s still a joke between the girls. Did she finally land it? We’ll have to watch and see!

2. Hannah will be appearing in Ravenswood for at least one episode

“I think that Hannah is definitely not ready to let go of him,” Benson said of her character’s relationship with Caleb (Tyler Blackburn). Though he’s off to Ravenswood to take on a show of his own, there will be crossover. Benson shared she’ll be heading to the Ravenswood set in New Orleans for at least one episode.

“They kind of do a mutual break and goodbye,” Benson explained. Though she’s not ruling out a reunion, the two are parting ways, at least for now.

3. “Things get crazy in the second half of the season”

Though the girls couldn’t share much about what this means, they were sure to say the finale will change everything. Bellisario called Season 4 the season of answers.

4. “It required a lot of screaming and crying”

Aria gets restrained in the second half of Season 4. Hale said she had to do so much screaming and crying in an episode that she lost her voice for two days! The scene involves another person, but Hale couldn’t dish on who, exactly, or what happens. All the liars agreed it was the most intense scene of the season.

Will Ezra finally be revealed as A? We can imagine that confrontation would be heartbreaking.

5. A different episode from any we’ve ever seen

Another thing to look out for this season is a unique episode that isn’t like any we’ve previously seen.

That’s all the hints they gave us about the episode. Something tells us we’ll know it when we see it.

What did you think of this year’s Pretty Little Liars Halloween Special?