Pauly D only just found out he’s the father of a baby daughter, but he’s already fighting with the mother for custody of the child. 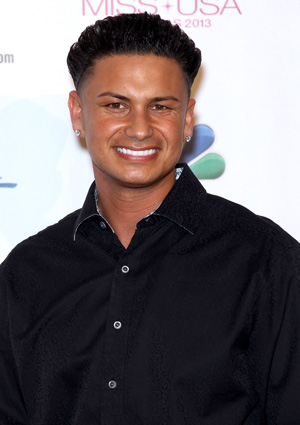 When Pauly D found out he had fathered a child, he was excited over the news, but now he’s ready to fight with the baby’s mom to take custody of his daughter.

The Jersey Shore reality star has filed dueling documents with his daughter’s mother, a woman named Amanda, and is fighting for custody of the baby. “The level of custody is unclear,” TMZ reported, but he’d like some sort of responsibility over the infant.

The 33-year-old DJ has yet to see the baby in person, but wants to definitely be part of her life. He’s also reportedly concerned for his child because the mother is only 25 years old, has another child and “once worked at Hooters.”

Pauly D at his handprint ceremony in NYC >>

Amanda wants child support for the baby, who was born in May, and still wants to fight Pauly D even though he has agreed to step in financially. But he claims that Amanda is using the baby as some sort of “winning lottery ticket” to get lots of money from Pauly D. Evidence of this was actually shown by the woman herself when she released a photo of the baby sitting in a high chair covered in $100 bills.

There’s definitely no love lost between Pauly D and Amanda at the moment. Their short-lived connection happened one night in Las Vegas when they were both drunk and ended up hooking up. According to TMZ, the two “straight up hate each other.”

Get a taste of Pauly D’s cocktails >>

Happy with the news that he’s now a father, Pauly D has stepped right up to the plate and is ready to take on his new role as parent.

Amanda filed additional court docs to formally establish paternity, but Pauly D had already taken a DNA test to learn he was the dad. He’s ready to be a father and is set on getting custody of his baby.