Prince George was christened today, giving us our first glimpse of the royal baby in three months, and his mother looked as glamorous as usual. 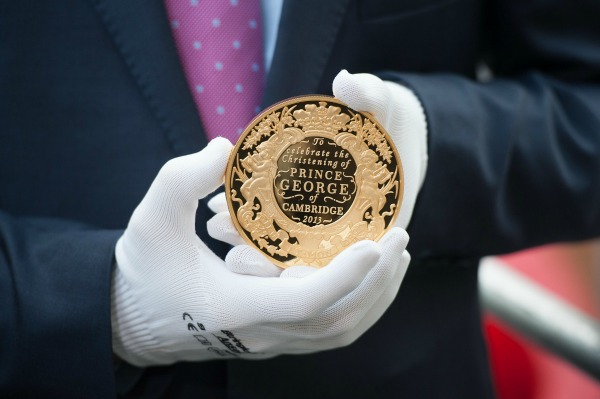 It’s a banner day for the royal baby! Prince George, who will one day lead the Church of England when he becomes king, was christened while surrounded by a small group of family and loved ones.

The ceremony was held at the small Chapel Royal in St. James Palace earlier today, a venue chosen for both its historical significance and its intimacy. Built in 1540, the chapel holds special significance to William as it was where the body of Princess Diana lay for several days awaiting her funeral.

Bucking royal tradition, his parents Prince William and the former Kate Middleton chose only one royal as a godparent — Zara Phillips, herself pregnant with her first child — filling the rest of the ranks with close friends Oliver Baker, Emilia Jardine-Paterson, William van Cutsem, Julia Samuel and Jamie Lowther-Pinkerton, Earl Grosvenor.

In addition to the godparents, only immediate family were in attendance, including great-grandparents Queen Elizabeth and Prince Phillip, grandparents Prince Charles and his second wife Camilla and Mike and Carol Middleton and the couple’s siblings Prince Harry and James and Pippa Middleton. Aunts, uncles and cousins were left out. In all, just 24 guests filled the chapel, compared to 60 at Prince William’s christening.

Prince George wore a replica of a 175-year-old christening gown worn by generations of royals, starting with Queen Victoria’s eldest daughter. The ever-glamorous Duchess of Cambridge donned a cream Alexander McQueen dress for the occasion, with a ruffles front, peplum and box pleat skirt. A matching fascinator by Jane Taylor and her trusty nude pumps completed the outfit.

Clarence House released a series of tweets describing the details of the service:

Official family portraits taken at the event are expected to be released tomorrow, including a particularly historic shot featuring a reigning monarch with three heirs to the throne: Queen Elizabeth with Prince Charles, Prince William and Prince George.