Melissa McCarthy has finally opened up about all the controversy that has surrounded her cover for Elle magazine’s 2013 “Women in Hollywood” issue. 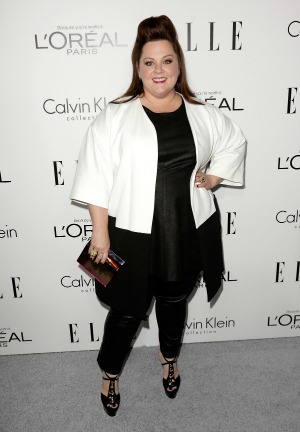 Melissa McCarthy has always been proud of her curves and the fact that she was not flaunting them, when she made the cover of Elle magazine’s 2013 “Women in Hollywood” issue, has caused controversy.

The belief was that Elle had told The Heat actress to cover up her plus-size figure, as she appears in long charcoal-green Marina Rinaldi coat, revealing very little flesh.

According to CNN, Slate writer June Thomas commented on McCarthy’s cover, noting, “The only visible flesh is a tiny triangle between the coat’s lapels and the briefest glimpse of calf.”

McCarthy has now broken the silence on the Elle cover controversy and it appears that critics where very wrong to criticize the magazine.

The Identity Thief star appeared at the Elle Women in Hollywood gala Tuesday night in Los Angeles, and revealed to E! News that she had actually been the one who wanted to wear the coat.

“What I found so bizarre is I picked the coat, I grabbed the coat. I covered up. I had a great black dress on but I thought, it comes out in November,” McCarthy explained to E! News.

“I was so sick of summer. I live in Southern California. I was like, ‘Give me a big coat to wear. Give the girl some cashmere!'”

The actress proved on her cover for Elle that she could look effortlessly glamorous, without needing to show skin. And she really does not understand why the cover has received so much controversy.

McCarthy joked, “They were like, ‘The dress is really great,’ but I was like, ‘Yeah, but look at this.’ I was just shocked I didn’t steal it. Now I think I really should have the coat. I’m petitioning for that coat. Give me that coat. I earned it, damn it!”

If both McCarthy and Elle magazine are proud of the work that they have done, then perhaps it is time the critics are silenced.

An Elle spokesperson previously responded to the criticism by saying, “On all of our shoots, our stylists work with the stars to choose pieces they feel good in, and this is no different: Melissa loved this look, and is gorgeous on our cover.”

While many people believe the cover was a wasted opportunity to show off the plus-size beauty’s body, she felt good about her shoot. At the end of the day, isn’t confidence in yourself the most important thing?

Tell us what you think about Melissa McCarthy’s Elle cover?