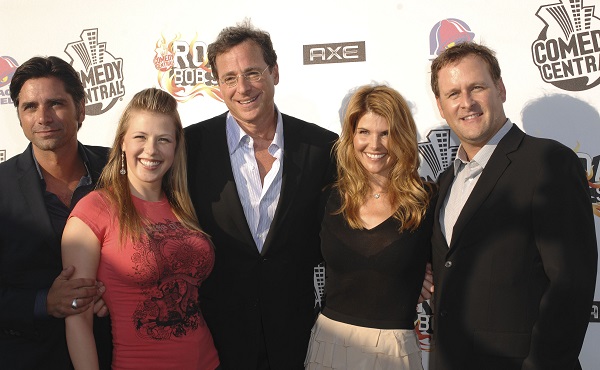 John Stamos shocked ’90s kids everywhere when he suggested he actually fell for Lori Loughlin while working with her on the set of Full House. At a recent event, Loughlin responded with plenty of love for Stamos, though she dodged the real question as to whether she ever had a crush on her on-screen hubby.

Newsflash: John Stamos is ready to settle down >>

Loughlin is happily married now, but when E! News cornered her at the Wallis Annenberg Center for the Performing Arts in Beverly Hills and told her of Stamos’ claim that she may have been the “one who got away,” she had no choice to respond. She did so with her usual sweetness.

“Oh my goodness. Well, we’ll never know, right?” she teased. Then she added, “I will always love John, always.”

Not exactly the same level of confession we got from her former co-star, but still kind nonetheless. When E! pressed harder, she blew it off coyly, calling them “funny.” It looks like we’ll never find out if Aunt Becky really ever loved Uncle Jesse.

That is, of course, until they return to their roles for a Full House reunion movie. Not that we know of one in the works! It’s just that something Full House fans have hoped for since the show ended more than a decade ago. As for Loughlin’s feelings on a reunion: She doesn’t appear to have completely written off the idea.

“I don’t think that there are any plans for a movie,” Loughlin said. “If it were a really good script and a great project but sometimes I think that it’s better off to leave those TV shows as they were and not do reunion shows.”

Squee! Would you tune in for a Full House reunion show? We certainly would!