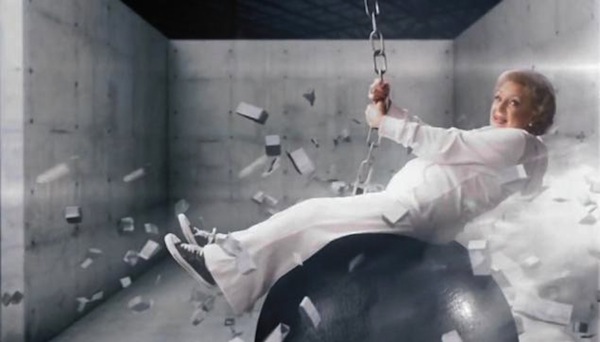 White straddles a wrecking ball — the same wrecking ball as Cyrus — in Lifetime’s hilarious new promo for Off Their Rockers. We’ve got the video for you below and it does not disappoint!

White explains, “I was asked to help promote my show, Off Their Rockers, which is coming to Lifetime. So, I got some ideas from recent pop culture events that really got the kids talking.” The video promo cuts to White in a concrete fortress as she rides the wrecking ball Miley-style. White does keep her clothes on but she’s dressed in all white.

At the end of the scene, White says, “Can someone bring me a sledgehammer.” Someone gets ahold of a sledgehammer and she innocently kisses it.

Not surprisingly, Lifetime’s genius idea to feature White on a wrecking ball has gone viral.

What does Cyrus think of White’s spoof? She seems to like it, evidenced by her retweet of the video.

Watch White in her own “Wrecking Ball” promo below. Be sure to catch Off Their Rockers, which premieres on Lifetime on Wednesday, Oct. 23 at 9/8c.