May has been wary of Skye since she arrived, while Ward has had her back. Coulson thought things were going pretty well, but he wasn’t prepared for the secret Skye revealed during “Girl in the Flower Dress.” 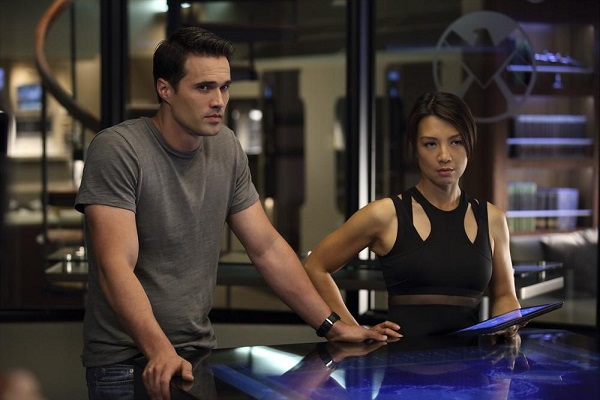 There have been five installments of Agents of S.H.I.E.L.D., and there has really been very little in the way of character growth or plot development. The one character that has been given the royal treatment by way of life-like story and progression has been Skye, and it was on her that “Girl in the Flower Dress” focused most of its attention.

Despite being one of the most highly-anticipated series of the season (and receiving outstanding ratings on premiere night), Agents of S.H.I.E.L.D. has been relatively unimpressive. The characters are, for the most part, one-dimensional.

Coulson lost the quick wit he had before dying in The Avengers. Melinda May spends too much time trying to be tough and hiding her softer side to the point she’s borderline dull. FitzSimmons try to be cute, but outside of finishing each other’s sentences on an annoyingly frequent basis, they’re left with relatively little to do. The four of them are clichés who could use a little diversity to shake things up.

Because Skye is the sole “civilian” on the S.H.I.E.L.D. team, she gets to experience things that the other team members take for granted in that whole alien-just-landed-on-earth kind of way. She makes fun of their rules and tries to get them out of their shells by not only playing Battleship, but by forcing her opponent to say, “You sunk my battleship!”

Ming-Na Wen chats with SheKnows about Melinda May >>

As her Supervising Officer, Grant Ward is the first in her line of sight to get the Skye treatment. It was his battleship she sunk, and his proclamation of such. He’s discovering there’s more to her than the free-wheeling hacker-chick they brought on board without doing the best background check. He’s giving her the benefit of the doubt in situations when, three weeks ago, he would have chosen a different stance. Skye is influencing his behavior.

Tonight a known combatant of some sort, code-name Centipede, hunted down and kidnapped one of the people S.H.I.E.L.D. had promised to protect. They were able to do this because Skye’s lover hacked S.H.I.E.L.D. and sold the list of names. Incidentally, unless I missed something, that list is still out there. Oops!

Skye wasn’t in on it, but she was immediately a suspect and her “cover” was blown. All this time and we still didn’t know she had another mission to her purpose with S.H.I.E.L.D., but we were about to find out what it was.

FitzSimmons were feeling sorry for Skye, Ward was steering clear and Sky was left with nothing left to do but tell Coulson the truth about why she was on the plane.

Skye has been searching and hacking for years for evidence of her parents, but coming up only with redacted files covered with the S.H.I.E.L.D. logo. For Skye, freedom of information is a very personal issue. No amount of money will ever buy her out of her passion, because she’s searching for herself.

Finally. Finally, there is something personal at stake for at least one of the characters that will give us a reason to care about what happens to them. That element — that moxie — has been missing. Without it, Agents of S.H.I.E.L.D. is nothing more than a procedural with smart tricks that just so happens to be associated with Joss Whedon — full of promise, but woefully short on delivery. It’s time to bring on the depth that made Firefly and Buffy the Vampire Slayer so phenomenal. It wasn’t fancy footwork, it was heart.