Kelly Clarkson continues to burst with excitement over her wedding day. See how happy she looks on her big day! 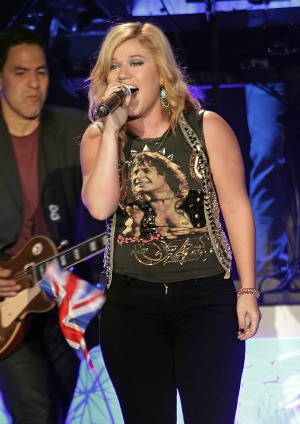 Kelly Clarkson might be the most excited celebrity bride ever. Within days of getting married to music manager Brandon Blackstock, the Season 1 American Idol winner already posted her gorgeous photos from the big day. Now get ready for the romantic music video!

On Tuesday, the new bride shared moments from her wedding day in a video set to the song “Heavenly Day” by Patty Griffin. The clip captures a gorgeous fall afternoon filled with love and happiness.

The 31-year-old posted the link to her video on Twitter.

Here is a little video of our special day! Thanks to everyone for all of your well wishes!!! #cloud9 #tieitup http://t.co/EoBpbQCx9T

The couple’s love is on display in the one minute and 27 second video that showcases the Blackberry Farm in Walland, Tennessee where the two got married. The camera captures their vows and the only two family members in attendance; Blackstock’s kids, Savannah, 12 and Seth, 6.

The newlyweds packed on the PDA throughout the picturesque video while Clarkson looks downright blissful in her Temperley London gown. Even though they had originally planned a huge wedding with pal Blake Shelton marrying them, they decided to scale back when it all became too overwhelming.

Instead the duo decided to make the day a little more private and special.

The Grammy winner explained to Us Weekly last summer, “We are just doing a small, little wedding — me and Brandon and the kids. That is it. All we have time for! But we’re happy with that. We just wanted to make it about us.”

The next project on Clarkson’s list is her Christmas album and a baby. The happy bride will probably be an ecstatic mom.