Aww, he really does care! Not only does he put Davina in her place, Klaus also proves tonight on The Originals he cares a lot more than we give him credit for. 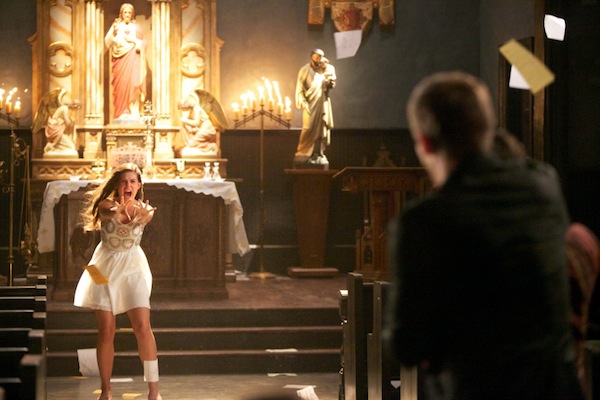 Well look who has a heart. OK, so it’s not exactly beating, but Klaus (Joseph Morgan) hasn’t forgotten how to use it on rare occasions. Tonight, The Originals showed us a bit of Klaus’ soft side. We’re not saying Klaus is going to stop his killing rampage or his plans to take over New Orleans anytime soon, but his motives are more genuine than we initially gave him credit for. It’s actually impressive how the show has created a character you can be terrified of one minute and then sympathize with the next.

This is the Interview with the Vampire episode

Last week was The Great Gatsby, and this week the theme is Interview with the Vampire. We’re back to the same point: The show doesn’t need to spoof already-done story lines in order to create a good show.

Still, Klaus’ desire to have Cami write his memoir didn’t bother us as much as the masquerade episode. Perhaps because the Interview with the Vampire theme worked better to further The Originals‘ storyline. Klaus has been telling Cami all about the vampires and then compelling her to forget whenever Klaus isn’t around.

Now that we know Cami is going to stick it to the vampires in upcoming episodes, we feel better watching her get totally used by Klaus.

Klaus cares most of all

Even as we watch Klaus compel Cami to be his inside person against Marcel, Klaus simultaneously manages to show some compassion for the girl.

Here’s where things get a little complicated. We learn this episode about Cami’s tragic past. Her twin brother was in seminary school when he suddenly snapped and killed nine students including himself. Cami has harbored a lot of unresolved feelings because of the event. Her brother displayed no previous violent tendencies. The event is the reason Cami has returned to New Orleans. She has insomnia and bad dreams and feels discovering the truth about what happened at the massacre is key to moving on.

Klaus compels Cami to move on from the massacre event despite Cami’s pleas that Klaus not take the grief away from her. He doesn’t just compel her to move on, however. He also tells her to sleep soundly knowing he will discover what happened on her behalf and bring whoever was responsible to justice if necessary.

Klaus also saves Hayley (Phoebe Tonkin) in tonight’s episode when she is betrayed by one of the witches. Hayley gets shot with an arrow but, thanks to her baby’s blood, heals quickly and is unharmed. She returns exhausted, and Klaus lifts her into his arms, holding her gently. It melted our hearts.

Marcel loves her, he loves her not

Rebekah (Claire Holt) and Marcel have another interlude in tonight’s episode. He tells her he’s found his queen in Cami, and Rebekah scoffs. She tells him she knows he’s still in love with her. Marcel doesn’t deny it and just sulks away.

The Originals sneak peek: Klaus and Cami continue to bond >>

We’d like a bit more consistent chemistry from these two. They passionately hate each other and then they passionately love each other. The idea is there, but there just haven’t been enough moments between the two to really sell the history just yet.

Hopefully in the upcoming episodes, we’ll see the two of them make out battle it out.

Elijah commeth as the voice of reason amid the chaos

Just in time for Halloween, Elijah rises from his grave.

The look on Davina’s face was priceless! After she spent a night on the town, nearly watching her crush, Tim, die by Klaus’ hand, she returns home to find Elijah out of his coffin. Turns out, Davina removed his silver dagger and even though she plunged it back into his body, it was enough to wake him.

Elijah doesn’t plan on hurting her. Yet. He’s got a plan. The little witch better play along.