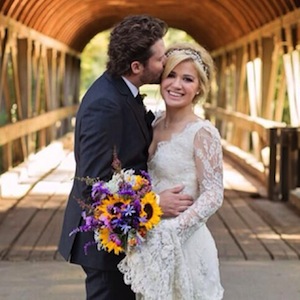 Kelly Clarkson didn’t want her mother, Jeanne Taylor, at her wedding Saturday. But in the end, it seems her family understood and actually supported her decision to keep the wedding small.

Clarkson, who married her manager, Brandon Blackstock, kept the ceremony and reception small: it was just her, her husband and his two children.

Clarkson’s mom talked to Celebuzz yesterday and reveled she was not present to see her famous daughter walk down the aisle.

“She said they were just so overwhelmed with the tour and they just decided to elope. But she didn’t want to hurt our feelings. She has a lot on her plate and I’ve seen her schedule for the next month and Christmas. But we’re happy for her and she’s so happy.”

Taylor continued, “She was afraid we might be upset. But we were fine with it… I had known she was under a lot of stress. And we just wanted her to be happy and not stressed out… I think the biggest thing for us to do was to allow her to do what she wanted to do.”

Clarkson’s mom also explained that the Grammy-winning singer is extremely private and such an intimate wedding made sense for her and Blackstock.

“She made a [wedding video] and we’ll get to see all of it. She said she cried through the whole thing anyway. She’s really emotional like that. She’s now glad she didn’t do it in front of a lot of people because then she’d be embarrassed.”

Clarkson had originally planned a huge wedding but scrapped those plans as life became increasingly hectic. “We had a wedding planned, like a huge one,” she said to E! News just before her nuptials.

“We are so busy that we finally just came to terms the other night and were like, ‘So, we change our minds and we want to elope.’ We just got so overwhelmed by it — all the decisions.” Kelly and Blackstock originally planned to wed on Oct. 20, 2013 but eloped on Oct. 15, 2013.

Clarkson and Blackstock were married just outside Nashville, Tennessee in a gorgeous outdoor setting just perfect for fall. Clarkson looked amazing in her wedding gown and now hopes to get pregnant in time for Christmas.