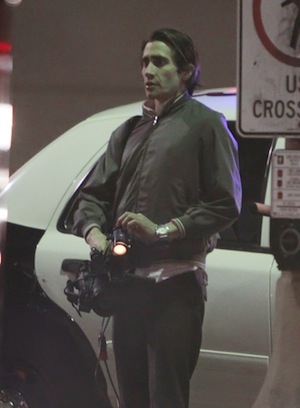 Have you seen Jake Gyllenhaal recently? He’s barely recognizable. These days the Hollywood hunk is noticeably thinner. His usual muscle-bound frame is more gaunt than grand. But don’t worry, he’s not seriously ill. The actor purposely lost weight for a film.

According to E! Online, Gyllenhaal dropped around 20 pounds for his new movie, Nightcrawler. In it he plays a crime scene stringer, a role that requires a more exhausted look.

He told E!, “I’m playing a character who’s hungry, figuratively and literally, who’s driven in ways to do things and succeed at any cost.”

Gyllenhaal continued, “I think that defines a generation in a lot of ways so I wanted to get their mentally and then have it transform me physically, because I am not one to rely on science as much as I am on just sort of instinct. That’s sort of the character.”

So how did he downsize his physique? Gyllenhaal didn’t depend on extreme diets or workout regimens. It was all about will power. He revealed, “I can only approach things from a mental place.” Therefore, if his mind wasn’t into it, there was no way his body would be.

His appearance in Nightcrawler is such a vast change from his time as the sword-swinging hero in Prince of Persia: Sands of Time. Oh how things change.

What do you think of Gyllenhaal’s slim look?