Ravenswood has all the ingredients for a spellbinding, supernatural drama. It knows its audience and plays to its strengths through well-drawn characters and genuine scares. 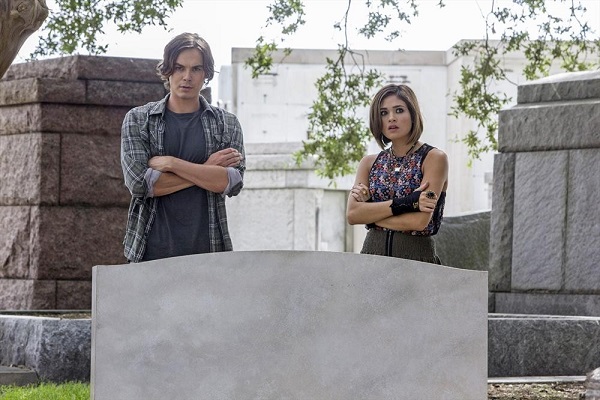 At long last, after about a year of teases and internet clues to the mystery that is about to unfold before us, Ravenswood made its debut on ABC Family. As an unashamed fan of Pretty Little Liars and an even bigger fan of Tyler Blackburn — who plays Caleb Rivers, around whom Ravenwood is being written — I’ve been waiting anxiously for the premiere. I was not disappointed.

That doesn’t mean there weren’t some hiccups in the execution. ABC Family and the producers of both series wanted to ensure that the two-hour spectacle was just that — and they tied the pilot of Ravenswood to Pretty Little Liars in such a way that, if you didn’t choose to watch the latter in the hour before Ravenswood premiered, you’d make sure to catch a subsequent viewing.

On the red carpet with Tyler Blackburn as he talks Ravenswood >>

Why? Because if you missed the Pretty Little Liars Halloween special, you were most likely pretty lost during the premiere of Ravenswood. Most of the action that lead up to the events in the pilot happened on Pretty Little Liars. The gravestone we saw in previews showing the face of Caleb was gone by the time Ravenswood aired, and gone with it was one that had a doppelgänger of Miranda (Nicole Gale Anderson) as well.

Instead, it was quickly mentioned by Caleb via a voice over at the beginning of the hour, with flashes of notable moments from the Pretty Little Hours Halloween special to guide us into the Ravenswood action. That, however, was the premiere’s only flaw.

It’s rare that a teen drama provides such deeply-drawn characters, especially in a pilot episode. The five main teens are all likable and, while they offer different aspects of the teenage experience — the foster kids from out of town; the homecoming queen, Olivia (Merritt Patterson) and her twin brother, the jock, Luke (Brett Dier); the well-protected daughter of the local newspaper, Remy (Britne Oldford) — each is so unique that you can’t wait to know more about them.

7 Creepy clues about what’s ahead on Ravenswood >>

The adults consist of Remy’s over-protective parents (her mother recently returned from a tour in Afghanistan), the twin’s mother (nicknamed the Black Widow as the town thinks she killed their father), Miranda’s Uncle Raymond Collins (Steven Cabral) and his employee, Carla Grunwald (Meg Foster), who we all know as someone who once protected Ali (Sasha Pieterse) during her time on Pretty Little Liars. Bonus points for making Grunwald nothing at all as we would have once expected her to be. Character shifts are always fascinating.

Caleb and Miranda have stuck up an easy rapport. He calls her Dude and wants to stick around to determine why her uncle was lying to them — particularly why he would feel the need to lie to a complete stranger. Miranda has no such desire, as she’s witnessed first-hand a wicked apparition in her uncle’s funeral home.

A town soaked in death is how Caleb described the town after he met Remy and she shared the town’s past with him. A flood in 1896 swept through town and things have never been “normal” again. At least that explains the abnormal lighting that seems to curse the town, as well as the blood-weeping statues and apparitions with long, skinny fingers too close for comfort.

Caleb’s inquiries into the disappearing headstones featuring he and Miranda got Remy involved, and they discovered something rather disturbing. About 100 years ago two (apparent) distant relatives bearing the names and faces of Caleb and Miranda were killed along with three other high school seniors in a train accident, one week after a soldier returned home from war.

After Remy recalls that similar incidents occurred last year, and given what they learned in the basement of the Ravenswood Gazette, she realizes Caleb and Miranda are in danger. She has no idea how immediate, as the apparition Miranda saw earlier forced a car carrying all five main characters to careen off the side of the road and into a river.

That’s one heck of a cliffhanger for a pilot episode, but also a brilliant way to weave five people who were virtual strangers into a tightly knit group very quickly. I suspect that will be the result of the accident.

Simply put, Ravenswood was one of the most compelling new teen dramas to premiere in a long time. There wasn’t one character who didn’t merit screen time, or exhibit deep emotions and intelligence which made them all worthy of further examination. I went in for Caleb Rivers and came out with a whole group of characters who deserve my interest and compassion.

Were you intrigued with the characters of Ravenswood? Share your verdict in the comments and be back next week as we’ll be reviewing the show all season!