Nikki DeLoach, who stars in the MTV hit series Awkward, had her first child with husband Ryan Goodell on Tuesday. The new baby, a boy, weighed in at 6 pounds, 15 ounces and is 21 inches long.

The actress has been married to Goodell, an entertainment lawyer, since September 2009, and the pair, who’ve been anxiously awaiting their son’s arrival, named him well before his birth. In fact, they “found” the name William Hudson before DeLoach was even pregnant. 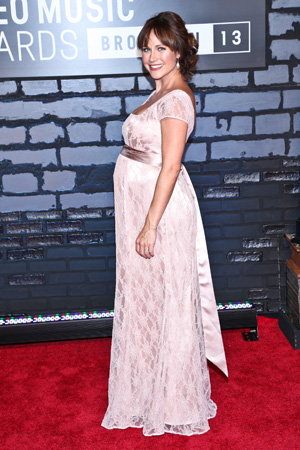 Nikki DeLoach on the new season of Awkward: It’s “authentic” >>

“From my experience, you don’t find a name, a name finds you,” DeLoach told SheKnows recently. “I don’t know how else to explain it other than I heard the name and knew I would have a boy, I knew it would be this year and I knew his name would be Hudson.”

The baby’s name is not the only interesting thing about DeLoach’s newborn. William actually came into the world on the same day as Awkward‘s mid-season premiere is set to air.

DeLoach plays a young mom named Lacey Hamilton, whose daughter, Jenna Hamilton, is played by Ashley Richards. On the show, Lacey and her daughter go through lots of the tribulations of growing up, so DeLoach looks forward to her new-mom status giving her a boost in her acting abilities.

“Moving forward, having a kid is only going to enhance all of my acting in all types of ways because I’ll be feeling things I’ve never felt before,” DeLoach recently told MTV. “I know this is going to change my life, and change my heart forever — it already has.”

DeLoach also dished about how becoming a mother has made her feel the love that much more.

“Your love grows bigger and bigger,” she gushed. “I didn’t even realize I had the capacity to love something so much. I can only imagine how much bigger that’s going to get when I see his little face.”