Kim Kardashian and Kanye West are getting hitched — and her engagement ring does not disappoint! 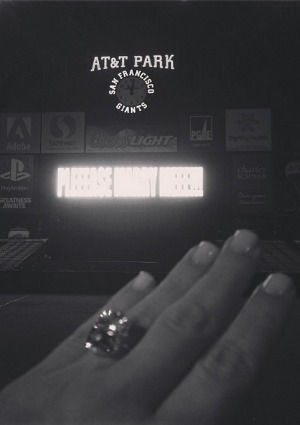 Kim Kardashian and Kanye West are getting married, which we all expected despite their frequent denials that the institution was a priority, but what we really want to know is how her bling stacks up!

Well, wait no more. Kardashian posted a photo of her shiny new engagement ring, taken just moments after West proposed at AT&T Park last night. In fact, you can still see his scoreboard plea in the background!

The ring is a 15-carat cushion-cut diamond designed by Lorraine Schwartz, who also happened to design the bride-to-be’s ring from Kris Humphries.

So how do the two stack up? Humphries’ ring featured a 16.21-carat emerald cut center diamond flanked by two 1.8 carat side diamonds. West’s offering is slightly smaller, but a simpler, and we think prettier, design.

Humphries just auctioned off the ring for $620,000. It’s reported worth was in excess of $2 million. The couple’s divorce was finalized shortly before the birth of Kardashian and West’s daughter North.

West popped the question on his baby mama’s 33rd birthday Monday night, after renting out the entire baseball stadium, hiring a brass band to perform and hiding the couple’s friends and family in the dugout to help them celebrate. Good thing she said yes!

Khloé Kardashian was the first in the family to talk about the happy news on Twitter, albeit rather cryptically.

Tell us: What do you think of Kim Kardashian’s engagement ring?