Doctor Who‘s 50th anniversary special is only one month away. After waiting all summer, are you ready for the first trailer? 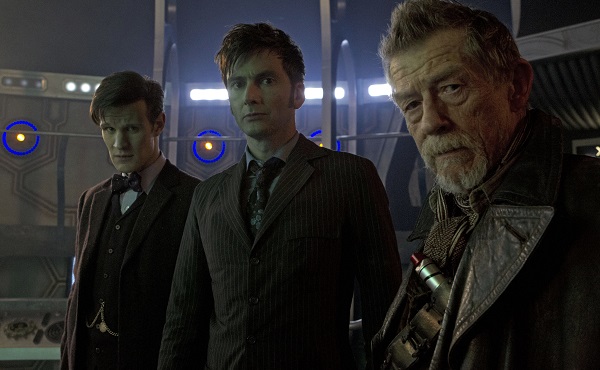 The BBC finally showed off the first trailer for Doctor Who‘s 50th anniversary episode, “The Day of the Doctor.” It came during a commercial break between Strictly Come Dancing and Atlantis and it brought Whovians to their knees in excitement. They’ve still got a month before they’ll actually see the episode air, though. We can’t offer you any exclusive sneak peeks yet, but we can share this brilliant/cool first look the BBC has shown so far.

As we already knew, “The Day of The Doctor” is bringing back some familiar and well-loved faces. Most importantly, we’ll see David Tennant, who played the 10th Doctor, in action once again. He’ll even be joined by his favorite companion, Rose Tyler (Billie Piper). Joining them is John Hurt, who appeared in last season’s finale as a quasi-Doctor with a dark past/future. From the video, it looks as if we’ll see some more footage of previous doctors, just not any new appearances.

The 50th anniversary episode is also particularly important for Whovians because it marks one of the last episodes for the current Doctor, Matt Smith, who announced earlier this year that he’ll be leaving the show at Christmastime. News of his departure did not sit well with fans. Though, his replacement, Peter Capaldi, certainly appears up to the task of being the next iteration of the Doctor.

Moffat says the Doctor could absolutely be a female someday >>

The UK network is the king of dragging out details and keeping fans on the edge of their seats. Few ways prove it more than how they withhold and taper out information on everyone’s favorite show: Doctor Who. Take, for instance, the show’s extended breaks (though they’re not quite as long as Sherlock‘s) or the secrecy around every single episode. What other show do you know that lands an entire show just to make the announcement of a new actor? Nothing for Who can be done without a shroud of mystery followed by massive fanfare. We, of course, eat it all up.

For more television news, sign up for our newsletter >>