Rihanna is known for her raunchy images and love of parties but DreamWorks Animation has other plans for the superstar. 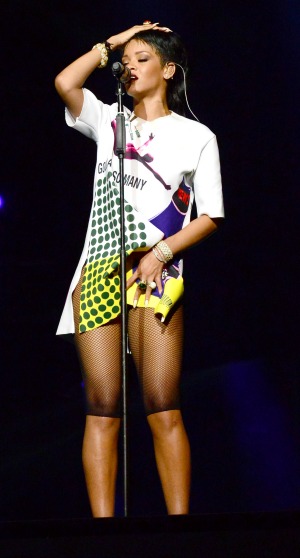 Asking Rihanna to tone down her sexiness is going to be a tough feat, given that she’s just landed herself in trouble with the Muslim community during a recent trip to Abu Dhabi.

Yet DreamWorks Animation has its sights set on turning the international superstar into a cartoon character, and in order for that to work, RiRi has to tone down the raunchy selfies and become a role model for teens.

A source revealed to Radar Online that the company’s CEO Jeffrey Katzenberg is a massive fan of the “S&M” singer and would love for her to “appeal to a wider audience.”

The source claims, “Jeffrey has been tracking Robyn [Rihanna’s birth name] for a couple of years. He is a huge fan and believes the sky’s the limit if she can clean up her act to appeal to a wider audience.”

“He sees a huge amount of money to be made there and wants to capitalize before somebody else does. He’s making pop-friendly movies and wants her to be in them.”

“It’s time for Rihanna to go from R-rated to PG-rated. This is Jeffrey’s firm opinion and he’s doing all he can to make it happen.”

Whether DreamWorks Animation will be able to clean up the 25-year-old singer’s behavior to make her more family-friendly remains to be seen. It will certainly be a tough task, though, given Rihanna’s love of swearing, partying, raunchy images and questionable choice in boyfriends.