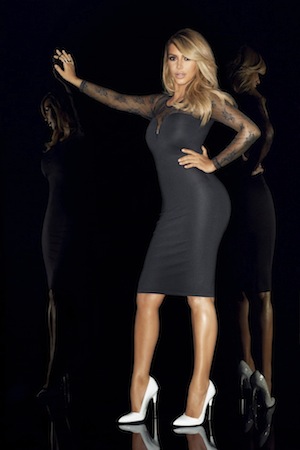 Kim Kardashian wasted no time getting back to her super-sexy self post-baby as evidenced by a sizzling new set of photos taken by Terry Richardson.

Kim and Kanye are engaged! >>

The über-famous Kardashian sister slipped into a curve-hugging little black dress and gave the camera her best angles as controversial photographer Richardson clicked away.

Judging from the photos, she’s comfortable in her new body.

Kim’s first post-baby photo shoot is for the Kardashian sisters clothing line, the Kardashian Kollection, which is set to hit U.K. stores on Thursday, Oct. 24, 2013.

Sisters Kourtney and Khloé also joined Kim for some of the sultry photos, which feature all three ladies surrounded by mirrors. In one photo Kourtney opted for a lace black jumpsuit while Khloé showed off her figure in a short red cocktail dress.

However, Kim is missing in most of the photos for the Kardashian Kollection campaign — at least in the photos that were released today. Kim recently revealed she’s now one of the many celebrities who lost on the Atkins diet but says since she’s breastfeeding 4-month old daughter, North “Nori” West, she still enjoys her “occasional cheat days.”

Said Kim of her post-baby weight loss, “I haven’t exercised a whole lot so far, just because I’ve been busy with the baby and I don’t want to leave her. I still have some [baby weight] to go.”

Whatever the new mom is doing seems to be working. Late last week, Kim Kardashian posted an extremely revealing post-baby photo of her booty on Instagram.

51 mins ago
by Daisy Maldonado