Johnny Depp showed up to honor a friend on Saturday, but he had a completely new look. 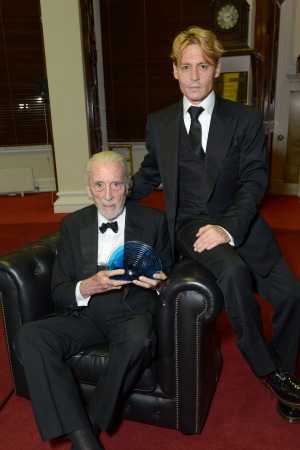 Johnny Depp is the latest to join the Hollywood crowd who has decided blonds do have more fun. The actor surprised a crowd on Saturday by appearing at the British Film Institute Fellowship ceremony awarding Christopher Lee.

The actor has appeared in many films with Lee, including Dark Shadows, Sleepy Hollow and Charlie and the Chocolate Factory.

“It’s my great honor to be here,” Depp said of Lee, saying he is “a great man, a very great man indeed.”

Lee had apparently been told that Depp was making a film in Europe and wouldn’t be able to attend, and was surprised when the actor walked out to present him with his award.

“Johnny, I don’t know what to say,” Lee said, according to The Hollywood Reporter. “I didn’t know you were going to be here. It is a very emotional moment for me as you can probably hear.”

Depp, who recently turned 50, ended his presentation by telling Lee, “I love you.”

Besides the Tim Burton films, the 91-year-old actor has appeared in films such as the Star Wars prequels, Lord of the Rings and The Hobbit.

Depp recently talked about why he may quit acting in the near future.

“At a certain point you start thinking and when you add up the amount of dialogue that you say per year, for example, and you realize that you’ve said written words more than you’ve actually had a chance to say your own words — you start thinking about that as kind of an insane option for a human being,” Depp explained to the BBC.

Depp’s hair ended up landing a headline after the night out in London. He joins other stars like Kim Kardashian and Sofia Vergara who have also made the blond transformation recently.

Depp is currently starring as the Big Bad Wolf in Into the Woods on Broadway, along with Meryl Streep, Emily Blunt, Chris Pine and Anna Kendrick.