Billy Bob Thornton revealed that Angelina Jolie’s jealousy was part of what ultimately ended their marriage. Thornton’s famous graphic sex scene with Halle Berry may have been the last straw. 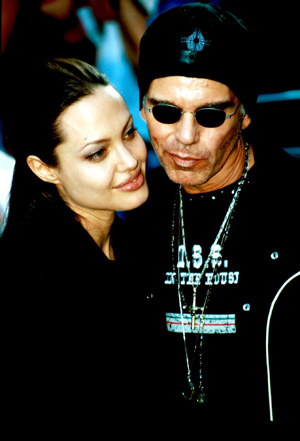 Angelina Jolie‘s jealousy was possibly a big factor in the demise of her marriage to Billy Bob Thornton, new reports reveal. Apparently, the explicit sex scenes with Halle Berry in Monster’s Ball may have been the last straw for Jolie.

In an interview with the Sun, Thornton said that a jealous Jolie was not happy to hear about her husband’s very hands-on sexy scenes with Berry in the award-winning film.

“[Halle] is one of the most beautiful women in the world and I am talking on the phone to my wife [Angelina] and she says, ‘What have you been doing today?'” Thornton said. “And I say, ‘Oh, I did that sex scene with Halle Berry.’ You are then asked if you actually touched her. I say, ‘I had to — it’s in the scene.'”

However, while the 58-year-old actor admitted Jolie’s jealousy was part of the reason they ended up divorcing, he also blames himself for the split.

“I blew my marriage to Angelina. I thought I was not good enough for her and I was too insecure,” Thornton said. “We are still friends.”

Jolie’s jealousy seems to not have gone away in her relationship with Brad Pitt. The Salt star is said to have banned Pitt from doing any sex scenes for his movie roles. In a recent interview with Esquire magazine, Pitt’s pal Frank Pollaro revealed that Jolie is probably the reason behind Pitt’s reluctance to get romantic in his films.

“This is a guy who has tried not to do any sexy scenes with other women since he’s met Angelina,” Pollaro told the magazine. “He’s crazy about her, and she’s the same way about him.”

But Jolie’s strong control over her husband’s career may prove to be an issue if Pitt ever decides not to give in to her demands. Jolie fell in love with Pitt on the set of Mr. and Mrs. Smith while he was still married to Jennifer Aniston. So she clearly wants to avoid having her husband do the same to her while filming intimate scenes with other sexy actresses.