Carol Burnett has enjoyed mass success and a lengthy career in comedy, and all the hard work has paid off because the funny woman just nabbed the Mark Twain Prize 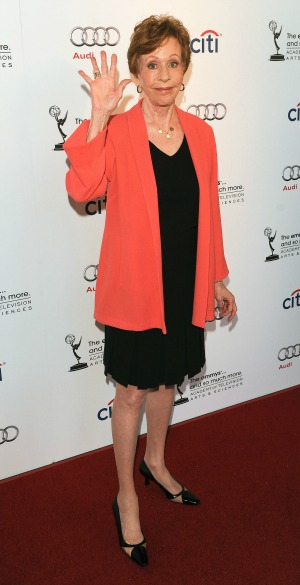 Carol Burnett has been honored with the most prestigious of United States comedic accolades, the Mark Twain Prize for American Humor.

Last night the 80-year-old funny woman was honored at the Kennedy Center for the Performing Arts.

And for good reason — Burnett has enjoyed nearly 50 years of success in the comedy genre and paved the way for female comedians worldwide.

She managed to land her first big break through bookers for the Ed Sullivan Show; she then set her sights on Broadway and enjoyed success on The Garry Moore Show.

During the ’60s, CBS recognized Burnett’s abilities and signed her to a 10-year contract to perform on sitcoms and TV specials, but the All My Children star’s ambition did not end there.

She launched her own variety show, The Carol Burnett Show, which enjoyed a very impressive 11-year run from 1967 to 1978.

That doesn’t mean that she didn’t face criticism from CBS executives who, as she recalled told her, “You know, variety is a man’s game.”

“At that time, I understood what he was saying, and I was never one to get angry. I said, ‘Well, this is what I know, and this is what I want to do.'”

In her acceptance speech Burnett showed just why she deserves this accolade.

“This is very encouraging. I mean it was a long time in coming, but I understand because there are so many people funnier than I am, especially here in Washington.”

“With any luck, they’ll soon get voted out, and I’ll still have the Mark Twain prize.”

Burnett was joined by fellow comedians, Tony Bennett, Dame Julie Andrews and past honoree Tina Fey, who got a little emotional as she praised Burnett, saying, “You mean so much to me, I love you in a way that is just shy of creepy.”

As Cappy McGarr, the co-creator of the Mark Twain Prize, said, “You know, serious times call for seriously funny people.”

We couldn’t agree more. It’s always good to have a laugh and we love Burnett for her ability to achieve this over and over again. Congratulations to the well-deserving recipient Carol Burnett.