Someone has been feeding walkers and burning bodies in the prison. Is it the same person doing both? Take a look at a possible list of suspects. 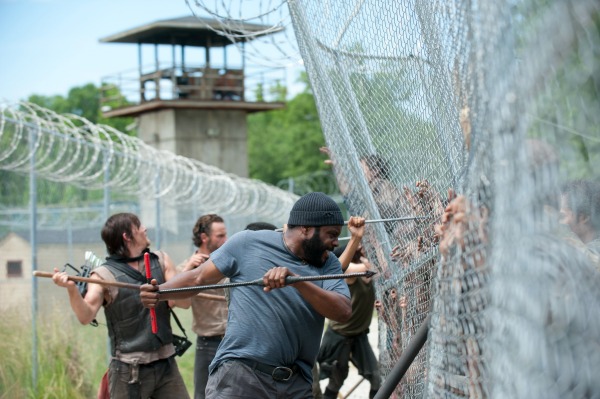 On the latest episode of The Walking Dead, the survivors in the prison were hit with danger from every possible angle. First there was poor Patrick dying of the super-flu, turning into a walker and proceeding to chow down on one of his former cellmates — which then started a chain reaction of more walkers and more feeding and… well, you get the picture.

VIDEO: The Walking Dead Season 4 behind the scenes >>

In addition the interior walker threat and the flu that caused it, there was also the mystery of just who might be feeding the walkers at the fence line. This mysterious person went so far as to bring some tasty rats for their undead friends to enjoy, thus bringing them closer to the prison and later threatening to tear down the fence.

Finally, there was another form of attack: the mysterious person who dragged those who had died from the super-flu and unceremoniously set their bodies on fire. While this move was undoubtedly a smart one, it caused a lot of pain and anger because they didn’t get permission for the burnings from the loved ones of the victims.

After watching the events of the most recent episode, one has to wonder if the walker-feeder and body-burner are the same person and if so, who are they?

Here are some likely suspects:

This little girl may look innocent, but she could be the one behind at least one part of the mystery. While it’s unlikely that she’d be burning bodies (she doesn’t have the strength to move them), chances are high that she could be the one feeding the walkers. She’s already shown a certain affinity toward them and might have been feeding them as a little girl might feed her pet hamster.

Once again, this is a suspect who may not be capable of both crimes as it’s extremely unlikely he’d go inside the prison and burn any bodies to protect those inside from the super-flu. But the Governor is definitely a likely suspect for the feedings. If his intentions are to slowly break down the prison’s protective fences, then creating a walker feeding frenzy outside the gates would be one way to go. If he’s alone, or still only has his last two followers, it could be the only way he has to get at the prison survivors for now.

While it’s hard to see why he would feed walkers at the fences, Hershel is definitely high on the list of suspects for burning the bodies of those who succumbed to the super-flu. While it may have seemed coldhearted to poor Tyreese, it was probably the only way that the doc could think of to protect everyone from the sickness. If he did do it, he probably would’ve needed help, given his missing leg, so chances are he got help from the other doctor in the group.

Player to be name later

This could be a person responsible for both the walker feedings and the burned bodies, but just who they are and what their motivations are is still unknown. If someone was looking to weaken the prison’s fencing, plus stir contention in the people living there, doing both acts would accomplish that. They would essentially be creating chaos from the inside, which is a sure way to cause destruction. If this is the case, then the Governor could possibly still be involved if he had a spy working for him on the inside.

Who do you think the traitor (or traitors) could be on The Walking Dead?